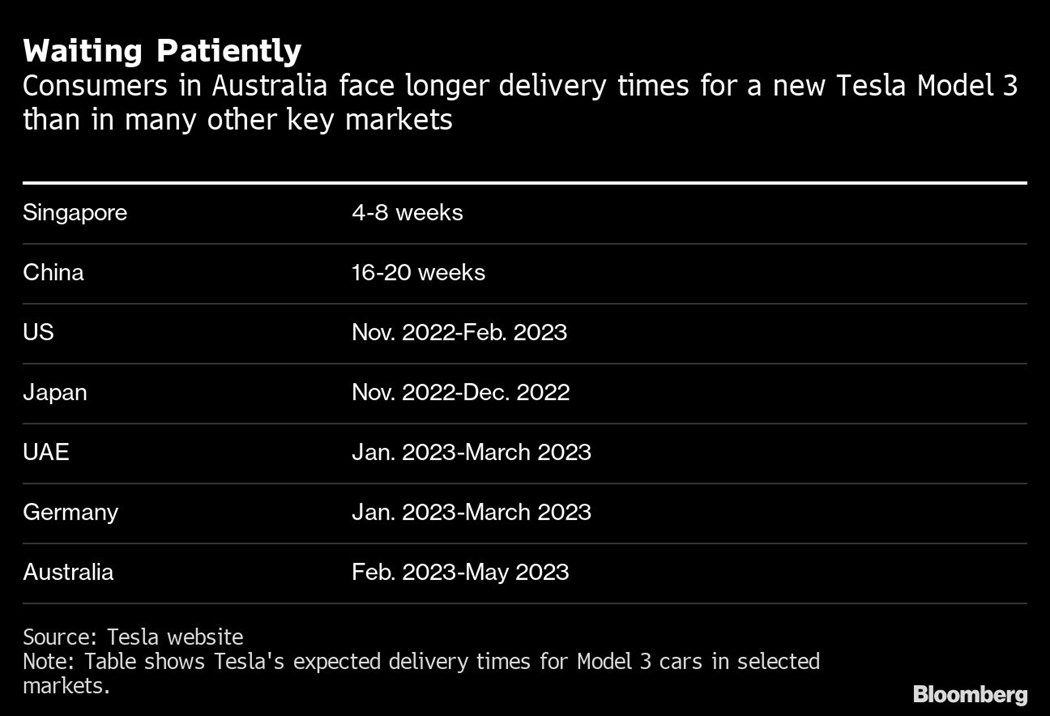 In a distant land the electric car industry has almost forgotten, one of the year’s unlikely best investments is turning out to be a new Tesla.

Months-old Tesla Model 3s with only a few hundred miles on the clock are selling for around A$130,000 ($91,000) or higher in Australia, more than one-third above the price of a new one.

That’s because the delivery time for a brand-new model is so long Down Under — up to nine months — that buyers are losing patience. They’re paying huge premiums to skip the queue, even if it means settling for a second-hand car.

A cocktail of industry disruptions is turning the traditional pricing model on its head. Supply-chain snags stemming from Covid-19 lockdowns are delaying auto shipments worldwide. At the same time, surging gasoline prices triggered by Russia’s invasion of Ukraine has buoyed demand for cheaper-to-run EVs.

A top-of-the range Model 3 Performance costing A$91,600 ($64,200) ordered in Sydney today would be delivered between February and May 2023, according to Tesla’s website. That’s a longer lag than in the US, Japan and Germany, while Tesla fans in Singapore might have to wait only four weeks.

Alternatively, barely used versions of the same car are available now from several sellers across Australia for between A$130,000 and A$138,000, according to carsales.com. Demand is so high for used EVs in Australia that Lloyds Auctions can’t sell them fast enough.

“We are telling anyone who might be considering selling their EV or hybrid vehicle, the time is now and we need your vehicle,” said Kirstie Minifie, local head of marketing and design for the auction house. “We have seen second-hand electric vehicles sell for auction over the original retail price.”

While the value of used Teslas has also climbed in key markets such as the US, the price distortion has been especially severe in Australia, a country that has long been an EV laggard.

Plug-in vehicles make up only 2% of all new-car sales in Australia. Takeup is way behind the global average of 13% in the final three months of 2021, and a tiny fraction of the market share in leading adopters like China and Norway.

Even before the current supply-chain snarls, Australia’s relatively low adoption of EVs had led major carmakers to prioritize other nations for their new models. Charging stations in Australia are still a novelty and are free in many public locations such as supermarket carparks or shopping malls.

Now, both factors are pushing up prices across the country as buyers race to get their hands on used EVs.

Even older EVs such as Nissan’s Leaf are selling for more than they were two years ago, he said. A Hyundai Ioniq 5 can take 12 months from order to delivery, and there’s a two-year wait for an EV6 from Kia, he said.

“Demand has just been unprecedented,” Broese van Groenou said. “We can’t keep up.”