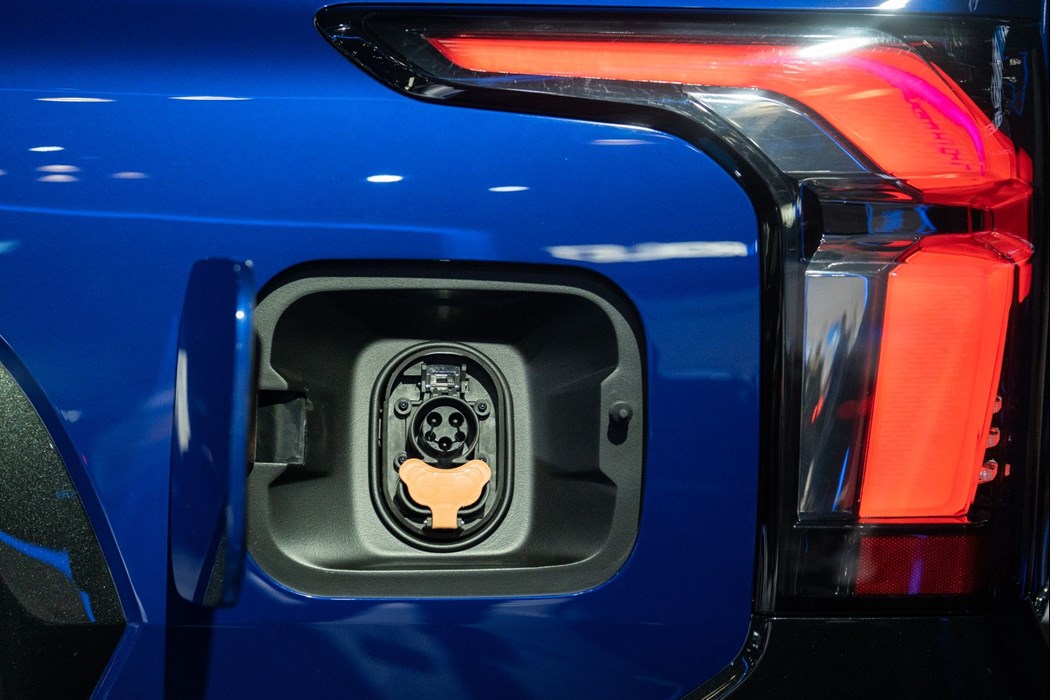 The charging port for a 2024 Chevrolet Silverado EV RST all-electric pickup truck during the 2022 New York International Auto Show (NYIAS) in New York, U.S., on Wednesday, April 13, 2022. The NYIAS returns after being cancelled for two years due to the Covid-19 pandemic. Photographer: Jeenah Moon/Bloomberg

(Bloomberg) -- New limits for claiming the electric-vehicle tax credit can remain in Democrats’ tax and spending bill after the Senate parliamentarian determined they comply with the chamber’s budget rules, according to a spokeswoman for the Senate’s tax-writing committee.

The provision, which automakers such as Ford Motor Co. and General Motors Co. lobbied to change, includes prohibitions on batteries and critical minerals that are processed in China and other “foreign entities of concern,” which could render the consumer credit largely useless for years to come.

Those stipulations, and other limits on who qualifies for the $7,500 per-vehicle tax credit, were key to gaining the support of Senator Joe Manchin, who has railed against the incentive for months, even dismissing it as ludicrous. His support for the broader package is necessary in the face of united Republican opposition in the 50-50 Senate.

At the behest of Manchin, the legislation also would impose new limits on vehicle prices and buyers’ income seen as restricting its use.

A first-time fee on the excess emissions of methane from the oil and gas industry also survived the review, Senator Tom Carper, chairman of the Senate Environment and Public Works Committee, said Saturday. Fees for leaks of the potent global-warming gas from oil and gas wells, pipelines and an array of other infrastructure would rise to as much as $1,500 a ton in 2026 for some operators.

The legislation dubbed the Inflation Reduction Act, which Senate leaders plan to bring to the floor as soon as Saturday, lifts a 200,000-vehicle per manufacturer cap in a win for automakers such as Tesla Inc. and Toyota Motor Corp., who have reached that limit.

Under Senate rules governing the fast-track budget procedure Democrats are using to advance their climate spending and tax bill, provisions that are found to be incidental or extraneous to the federal budget can be challenged. Those that don’t meet the test must be removed or modified.

A move in the bill to tie the value of clean-energy tax credits to criteria such as paying workers prevailing wages had been seen as ripe for a “Byrd Rule” challenge as well, but survived, said Ashley Schapitl, a spokeswoman for the Senate Finance Committee.