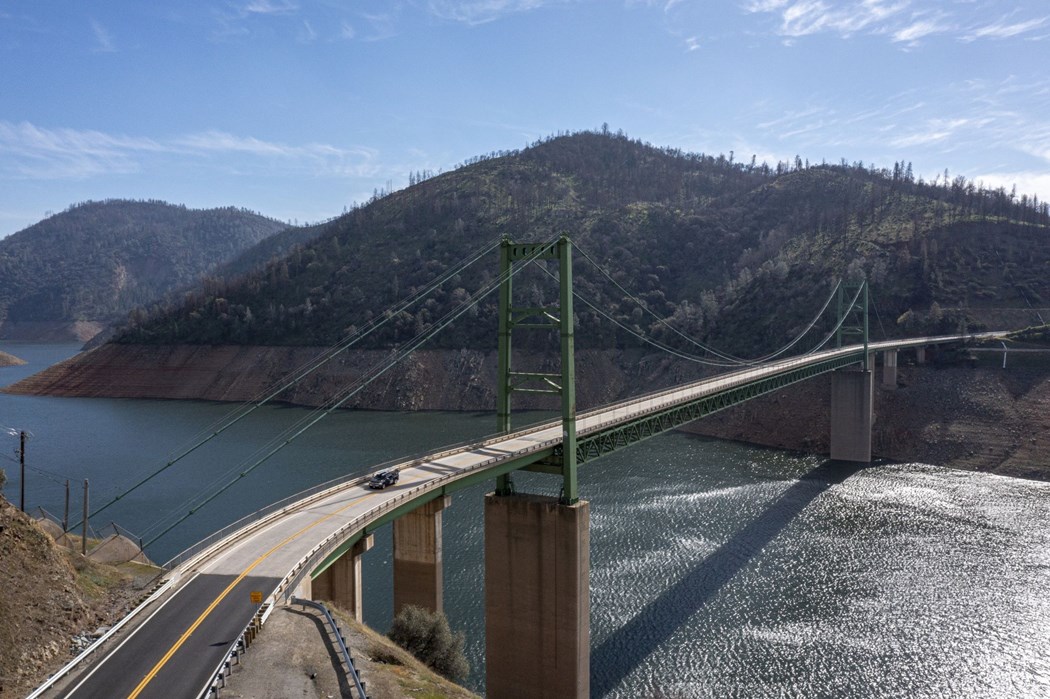 (Bloomberg) -- The historic drought that’s choked off rivers and reservoirs from the Rocky Mountains to the California coast is threatening to strain power grids this summer, raising the specter of blackouts and forcing the region to rely on more fossil fuels.

Many reservoirs that should be brimming with spring snowmelt show bathtub rings of dry dirt instead, including the largest one in the U.S., Lake Mead, which fell this week to a record low. Hydropower dams feeding off those reservoirs won’t be able to pump out as much electricity as they should, if they keep operating at all. After the drought last summer shut down the hydro dam at Lake Oroville, California’s second-largest reservoir, for five months, officials warn that’s no longer a distant possibility.

“We never thought it would be realized in our lifetime,” Governor Gavin Newsom said last week during a trip to the dam, meant to remind Californians about the dangers of the drought. “It happened. And the prospects that it will happen again are very real, particularly because we had the driest January, the driest February, and driest March in California history.”

One of California’s key water districts declared an emergency this week, limiting outdoor water usage for about six million people. The state had to resort to rolling blackouts during an extreme heat wave in 2020, and eastern Washington did the same in 2021. California had recently closed several old natural gas power plants as it shifts to solar and wind power. Low hydropower was one of the reasons the state suffered from a shortage of power during the heat wave’s hot nights.

Drought and subsequent power blackouts are but one example of how extreme weather conditions are straining cities and infrastructure built for a different, more stable climate. Last year, the U.S. endured 20 weather events that caused at least $1 billion in damage apiece, including the February deep freeze in Texas that killed more than 200 people. In all, extreme weather cost the country about $148 billion in 2021, according to the National Centers for Environmental Information. In the 2010s, the average was $89 billion per year.

Less hydropower means the region’s fossil fuel power plants will burn more natural gas and coal to pick up the slack. That’s a problem for states trying to cut their greenhouse gas emissions and fight climate change. And even the increased reliance on fossil fuels has its limits. States across the West have all grown dependent on importing power from each other during times of high demand. When a strong heat wave strikes multiple states at once – blanketing, say, the coast and the southwest – supplies grow tight, and the possibility of blackouts rises.

“We're in a difficult situation,’’ said Michael Wara, director of the Climate and Energy Policy Program at Stanford University. “If there’s not a lot of hydro to go around, and if we have regions having a heat wave together, things get trickier.”

The Pacific Northwest coast — from Portland, Oregon up to Seattle — has received roughly average amounts of rain and snow for the current water year, which began in October, according to the National Weather Service. But from Eastern Oregon south to the Mexico border and extending across the Southwest, the La Nina weather phenomenon brought another drier-than-average winter, and drought grips nearly the entire region. April snows in California’s Sierra Nevada Mountains helped some of the state’s reservoirs reach average for this time of the year, while others are far below normal.

The problem is particularly dire on the Colorado River, one of the region’s most important sources of water and energy. Lake Powell, the river reservoir which feeds the Glen Canyon hydropower dam, stands at 37% of normal capacity for this time of year. Officials from the federal government and seven states agreed to orchestrate flows into and out of the lake to ensure the dam’s generators keep running. As a result, less water will run downstream to Lake Mead, which feeds the Hoover Dam. That will cut the amount of drinking water available to residents of Arizona, California, and Nevada.

“Those two resources in particular are being threatened by the possibility of having to shut down,” said Branden Sudduth with the Western Electricity Coordinating Council, which helps oversee power grids across the region. His organization sees a “slight possibility” that the Glen Canyon Dam could shut as early as this summer or fall. If it does and a prolonged heat wave hits, blackouts could result, he said.

Western states “have been retiring a lot of large base-load coal resources, that makes our availability of the supply of generation that much lower,” said Sudduth, WECC’s vice president of reliability planning. States “haven't been replacing it fast enough with other types of resources, and that makes the importance of these large hydroelectric generators that much more important.”

BloombergNEF forecasts that hydropower generation in California and Oregon’s Bonneville Power Administration, together, will drop about 2% from last year, which was already a drought year. The forecast is nearly 24% lower than in 2019, the region’s last wet year. Newly added renewable power, as well as grid-scale batteries, will pick up some of the slack, particularly in California. But the region as a whole will burn perhaps 2 billion cubic feet more of natural gas each day than it would have in a normal hydro year, said Gary Cunningham, director of market research at brokerage Tradition Energy.

Southern California is at risk of volatile gas prices and in extreme conditions, potentially brownouts, he said. That’s because gas flowing westward on the El Paso pipeline from Texas, a key source for the power-plant fuel, is restricted after a rupture last year. The Los Angeles area’s massive Aliso Canyon gas storage facility is still operating at reduced levels after a 2015 leak, although regulators have approved increased usage for this summer.

“Under worse circumstances, we could see the need for rolling brownouts and blackouts in Southern California,” Cunningham said.

And there is, of course, no sense of when the drought might end. Some scientists, studying centuries of tree-ring data, say the southwestern US is gripped in a 22-year "megadrought" that ranks as the region's driest spell in at least 1,200 years. Occasional wet years in that two-decade stretch have brought only temporary relief. And they attribute much of the drought's severity to climate change.

“Given the length and intensity of drought conditions in the West, there is a growing sense that low hydro availability is the ‘new normal,’” said Teri Viswanath, lead economist for power, energy and water at CoBank ACB.

(Updates to say that Lake Mead fell to a record low)