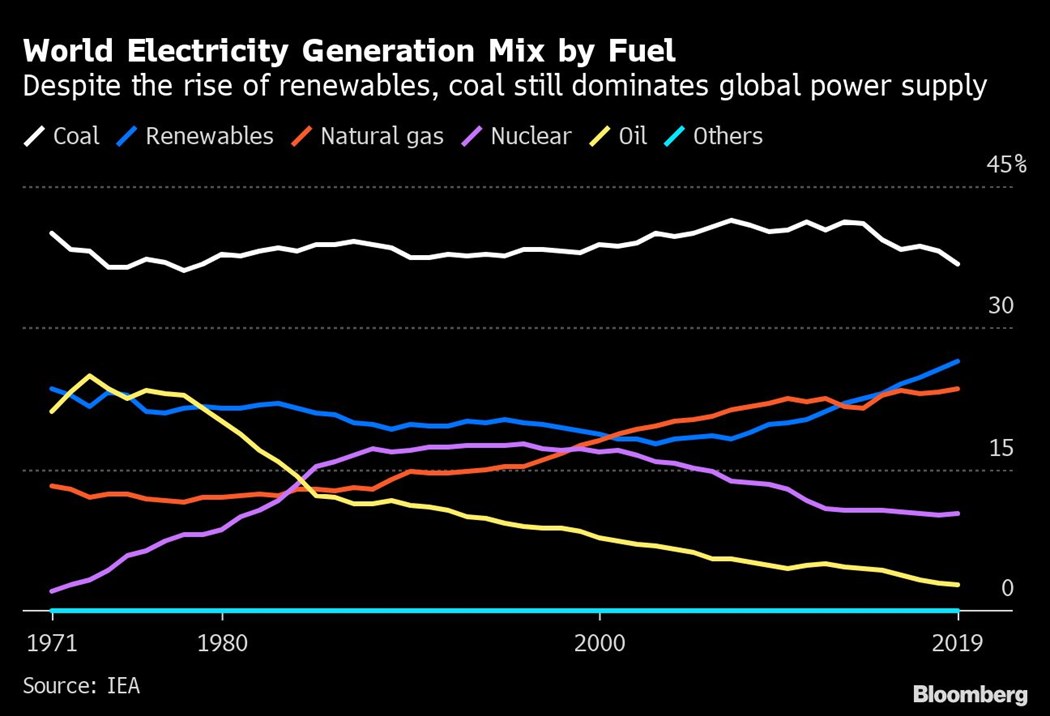 The incoming government agreed that Europe’s powerhouse economy will stop burning coal for electricity by 2030, eight years earlier than planned, according to a coalition agreement document. Rapid expansion of renewable energy plants and a fleet of new natural gas generators will make up for the shortfall in electricity production.

“We will further develop climate legislation in 2022 and launch an immediate climate protection program with all the necessary laws and measures,” the parties said in the accord. “All sectors will have to contribute: transport, construction and housing, power generation, industry and agriculture.”

After nearly two months of intense negotiations, Olaf Scholz, the incoming chancellor from the center-left Social Democrats, presented the agreement with the Greens and the pro-business Free Democrats. The accord includes ambitious targets for expanding renewable energy capacity, including a commitment to allocate 2% of land in Germany to renewable generation such as wind farms.

“We welcome the fact that the coalition recognizes the great importance of network infrastructure as the backbone of the energy transition - especially with regard to financing and investment conditions,” Leonhard Birnbaum, chief executive officer of utility EON SE said in an emailed statement.

Germany has committed more than 500 billion euros ($560 billion) to the the energy transition since the turn of the century, according to the Dusseldorf Institute for Competition Economics. Yet coal still supplies almost a quarter of Germany’s electricity, a situation that sits uneasily with the country’s international climate obligations.

Greening Germany’s energy system proved challenging to the outgoing administration under Chancellor Angela Merkel. While Germany planned to simultaneously quit coal and nuclear generation, it lacked a strategy for generating electricity on days when the sun doesn’t shine and the wind won’t blow.

Construction of power lines to carry electricity generated from wind farms faltered due to legal challenges from not-in-my-backyard protesters. The new coalition said it would seek to speed the construction process, a move needed to boost renewable capacity.

The coalition said it aimed to meet 80% of energy demand from renewable sources by 2030, an increase from country’s previous target of 65%. In 2020, renewable energy accounted for 40% of the country’s energy mix.

“We make it our common mission to drastically accelerate the expansion of renewable energies and to remove all hurdles and obstacles,” the coalition said.

The new government also announced it would seek to keep carbon emission permit prices above 60 euros per ton over the long term if the EU hasn’t agreed on a minimum level in the coming years. It also hinted at introducing a minimum price or adjusting the supply of the certificates to meet that aim. Carbon permit futures climbed to a record 73.18 euros after the plan was announced.

The incoming administration also decided to eliminate a surcharge used for many years to support clean power growth, as renewable costs have become more competitive with fossil fuels. The so-called EEG levy won’t be added to German power bills from January 2023.

Vital strikes a US $2.3bn deal with Vivo Energy