Japan Is Backing Oil and Gas Even After COP26 Climate Talks 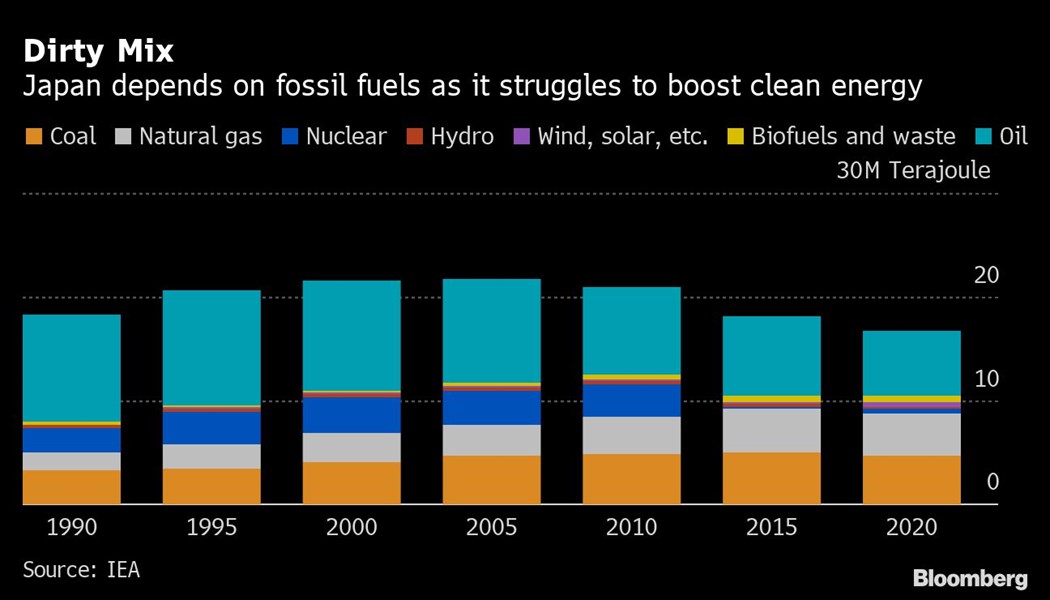 It’s been less than a month since world leaders pledged to combat climate change at the COP26 summit in Glasgow, yet Japan is already showing signs of putting the brakes on divestment from fossil fuels.

(Bloomberg) -- It’s been less than a month since world leaders pledged to combat climate change at the COP26 summit in Glasgow, yet Japan is already showing signs of putting the brakes on divestment from fossil fuels.

Government officials have been quietly urging trading houses, refiners and utilities to slow down their move away from fossil fuels, and even encouraging new investments in oil-and-gas projects, according to people within the Japanese government and industry, who requested anonymity as the talks are private.

The officials are concerned about the long-term supply of traditional fuels as the world doubles down on renewable energy, the people said. The import-dependent nation wants to avoid a potential shortage of fuel this winter, as well as during future cold spells, after a deficit last year sparked fears of nationwide blackouts.

Japan joined almost 200 countries last month in a pledge to step up the fight against climate change, including phasing down coal power and tackling emissions. However, the moves by the officials show the struggle to turn those pledges into reality, especially for countries like Japan which relies on imports for nearly 90% of its energy needs, with prices spiking partly because of the world’s shift away from fossil fuel investments.

The nation has been slow to make any concrete commitments to phase out coal in the near term, and has often been criticized for its funding of overseas power plants that use the dirtiest burning fossil fuel. The government has also avoided joining efforts by developed nations to reduce consumption of natural gas.

Japan’s Ministry of Economy, Trade and Industry declined to comment directly on whether it is encouraging industries to boost investment in upstream energy supply, and instead pointed to a strategic energy plan approved by Prime Minister Fumio Kishida’s cabinet on October 22. That plan says “no compromise is acceptable to ensure energy security, and it is the obligation of a nation to continue securing necessary resources.”

That latest strategy calls for the share of oil and natural gas produced either domestically or under the control of Japanese enterprises overseas to increase from 34.7% in fiscal year 2019 to more than 60% in 2040. Japanese officials plan to convey to other nations the importance attached to continued investments in upstream supply, the people added.

While Japan will likely avoid rolling blackouts or gasoline rationing this winter when demand for energy peaks in the region, the global energy crisis is leaving many within the government thinking about how to prepare for the future. Japan is still expected to be highly dependent on fossil fuels for the next decade as there is limited available space to significantly expand solar power, and the nation’s wind sector is developing slowly. It’s also struggling to restart nuclear reactors in the wake of the Fukushima disaster.

Japan’s trading houses, including Sumitomo Corp. and Marubeni Corp., are aggressively divesting from fossil fuels amid an uncertain future for the energy sources and pressure from shareholders. These companies, formally known as “Sogo Shosha,” have traditionally been among the biggest investors in oil and natural gas assets in order to bring the fuel to resource-poor Japan.

Oil prices had surged to the highest level since 2014 in October, which many Japanese government officials believe was exacerbated by a lack of investment in new supply, the people said. Meanwhile, liquefied natural gas prices have jumped to a record on the back of a global shortage, helping to push Japan’s wholesale power rate to the highest level for this time of year.