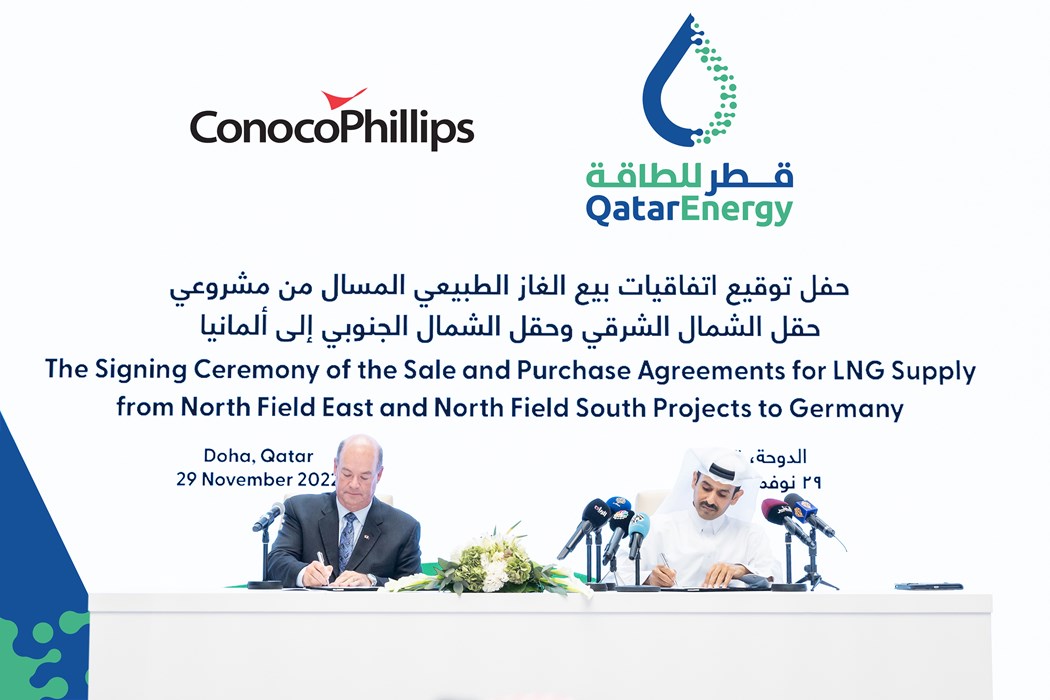 The SPAs were signed on Tuesday by His Excellency Saad Sherida Al-Kaabi, the Minister of State for Energy Affairs, the President and CEO of QatarEnergy, and Ryan Lance, the Chairman and CEO of ConocoPhillips, at a special event held at QatarEnergy’s headquarters in Doha.

QatarEnergy has announced the signing of two long-term LNG sale and purchase agreements (SPAs) between QatarEnergy and ConocoPhillips affiliates for the delivery of up to two (2) million tons per annum (MTPA) of LNG from Qatar to Germany.

Pursuant to the two SPAs, a ConocoPhillips wholly owned subsidiary will purchase the agreed quantities to be delivered ex-ship to the “German LNG” receiving terminal, which is currently under development in Brunsbüttel in northern Germany, with deliveries expected to start in 2026, QatarEnergy said in a statement.

The LNG volumes will be sourced from the two joint ventures between QatarEnergy and ConocoPhillips that hold interests in Qatar’s North Field East (NFE) and North Field South (NFS) projects, the company said.

The SPAs were signed on Tuesday by His Excellency Saad Sherida Al-Kaabi, the Minister of State for Energy Affairs, the President and CEO of QatarEnergy, and Ryan Lance, the Chairman and CEO of ConocoPhillips, at a special event held at QatarEnergy’s headquarters in Doha.

“We are pleased to sign these agreements with our partner ConocoPhillips to supply up to 2 million tons per annum of LNG to Germany from the two QatarEnergy-ConocoPhillips joint ventures in the NFE and NFS LNG expansion projects respectively, starting in 2026,” H.E. Al-Kaabi said at the signing ceremony.

“These agreements are momentous for several reasons. They mark the first ever long-term LNG supply to Germany with a supply period that extends for at least 15 years, thus contributing to Germany’s long-term energy security. They also represent the culmination of efforts between two trusted partners, QatarEnergy and ConocoPhillips, over many years, to provide reliable and credible LNG supply solutions to customers across the globe, and today, to German end-consumers. This is a concrete demonstration of QatarEnergy’s resolve to provide reliable energy supplies to all major markets around the world, and of our commitment to the German people,” he added.

According to the minister, since Germany was the largest gas market in Europe with significant demand in the industrial, power, and household sectors, QatarEnergy was committed to contribute to the energy security of Germany and Europe at large.

“The agreements we are about to sign today are a further manifestation of this commitment, which is reinforced through the sizeable investments we have made and continue to make along the entire gas value chain encompassing production capacity increases in Qatar and the Golden Pass LNG export project in the United States,” H.E. Al-Kaabi said.

The investments also include the execution of the largest LNG ship building program in the history of the energy sector, as well as securing long-term commitments in LNG receiving infrastructure in several European countries. “Our dialogue with our European partners continues with the aim of achieving greater energy security, long-term market stability, and a smoother energy transition for the benefit of all,” the minister said.

On his part, Ryan Lance, the Chairman and CEO of ConocoPhillips said: “QatarEnergy and ConocoPhillips are excited for the opportunity to responsibly and securely supply world markets with LNG from the Qatari expansion projects.”

“These agreements will provide an attractive LNG offtake solution for our new joint ventures with QatarEnergy and position the joint ventures as reliable sources of LNG supply into Europe,” he added.

ConocoPhillips’ partnership in the North Field LNG Expansion Projects is made up of a 3.125% share in the NFE project and a 6.25% share in the NFS project, which are planned to commence production in 2026 and 2027, respectively.