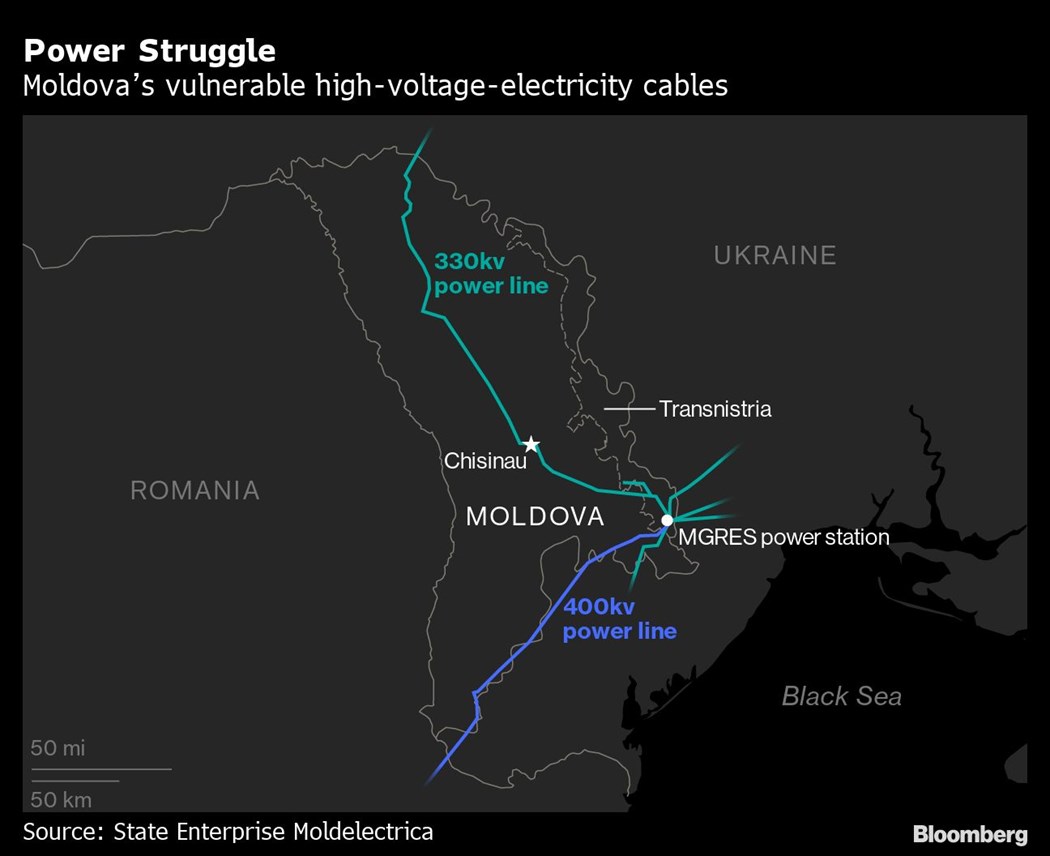 (Bloomberg) -- The group at Moldova’s electricity utility tasked with keeping the country’s lights on were out of breath, literally running between meetings.

Backed by a staff of just 17, acting Energocom general director Victor Binzari and his two sidekicks have been scrambling to find new sources of power since mid-October, when Russian missile strikes in Ukraine took out the substations providing almost a third of Moldova’s electricity imports.

Almost overnight, Moldova had to start buying about 80% of its power and half its natural gas from Europe —  the most abrupt transition from Russian to Western energy supplies experienced by any former Soviet-bloc country since the empire began its collapse in 1989.

Russia Knocks Out the Power Keeping Millions of Ukrainians Warm

On Tuesday, Russia’s energy giant Gazprom PJSC threatened to cut gas supplies further as of Nov. 28. On Wednesday, Moldova was without power for two hours after Russian missile strikes on Ukraine interrupted emergency flows from Europe.

Energy costs have tripled or more, blowing an estimated 8% of GDP hole in one of Europe’s poorest economies and creating a ready target for Moldova’s pro-Russia opposition parties to attack the government.

“You understand that most people don’t have the possibility to pay, it is a huge difference,” Binzari said at his office in central Chisinau, squeezed between a relentless round of meetings and calls that has left him and his advisers with little sleep.

The European Union says it will help with funding, but money isn’t the only issue.

The 400 kilovolt cable from Romania through which the country now gets most of its power threads either side of the border with Ukraine before landing at a power station in Transnistria, a separatist territory that broke away from Moldova with the help of Russian troops in 1992.

Until Nov. 1, the mainly gas fired power station — run by the Russian-owned Moldavskaya GRES — provided the rest of the country with over half its electricity. Now it’s a de facto distribution hub for power on its way from Romania to Chisinau. A well-aimed Russian missile, or just the flip of a switch in Transnistria, could cut Moldova’s new European lifeline.

Wednesday’s nationwide blackout offered a foretaste. The cable from Romania likely failed in a domino effect as missile strikes disrupted the grid in Ukraine’s Odesa region, according to Maciej Wozniak, a Polish adviser sent to help Energocom.

Nations across Europe are struggling with rising energy prices, but none has seen prices rise as fast, from as low a base, or to be paid for by as poor a population. It took Poland seven years to make the transition to market prices, Wozniak said.

EU Proposes Brake on Gas Prices as Russia Squeezes AgainMoldova has not yet suffered sweeping blackouts of the kind seen in Ukraine. But President Maia Sandu said in early November that the price of gas to consumers had risen six-fold in a year, and families were now spending up to 70-75% of their incomes on utilities. Pro-Russia parties have organized protests to channel popular anger.

Russia dismisses accusations it uses energy as a weapon. Gazprom gave justifications for cuts to Moldova’s contracted supply in October and November that were commercial and technical, respectively. Flows are down 49% from the amount due this month, according to Moldova. Explaining its latest threat of further cuts, Gazprom said Ukraine was holding onto transit gas intended for Moldova.

On Wednesday, Moldovagaz Chief Executive Officer Vadim Ceban said in a Telegram post that Ukraine did hold Moldovan gas on a balancing account, but by agreement; Moldova lacked capacity to store gas that had no buyers in October’s unusually warm weather, but would take its gas as temperatures fall.

As occurred in 2006, Gazprom’s disputes with Ukraine (and now Moldova) could end up cutting onward gas supplies to Europe.

“It isn’t just a war being waged by generals in Ukraine, this is also economic and informational warfare,” said Tatiana Savva, deputy director of Moldova’s Public Property Fund, who also heads Energocom’s supervisory board and has pitched in to help Binzari.

Still, there are reasons Moldova’s worst fears may not materialize. If Transnistria cut the cable from Romania, for example, it could soon find the steel and other exports on which it depends for revenue blocked from reaching their EU markets.

The minor miracle is that Moldova’s lights have stayed on at all. Still wholly dependent on Soviet legacy energy networks until this year despite warnings, the country is suddenly having to buy electricity contracts on European exchanges. That required opening foreign subsidiaries, offices and bank accounts, as well as registering for a Romanian trading license in the space of days.

“Last year we made 10 trading contracts. In the last two weeks we signed 30,” said Savva. “Where we would like to end up is with a diversified energy supply and a fully staffed company, and I’m not talking about 17 people and a dog.”

Energocom needed so few personnel (in January there were 12, soon there will be 20) because until this year, little had changed since the USSR’s 1991 dissolution in the way Moldova got its power and gas. Electricity came from the same power plant, over the same cables, as in Soviet times.

Moldova saw the Russian energy cuts coming, said State Secretary for Energy Constantin Borosan. His ministry bought and stored as much gas as it could. It converted heating plants from gas to heavy oil, among dozens of other measures. With an assist from warm weather, he says, natural gas consumption fell almost 50% in October, year-on-year, and electricity consumption by 14.4%

But power is hard to store and failures can be destructive. Take Chisinau’s glass factory, on the outskirts of the capital, which makes bottles for wines and spirits across Europe. Just five minutes without power would force the factory’s furnace to shut down, according to Chief Executive Officer Ion Covrig.

“It would take us 15 months and many millions of dollars to rebuild the furnace so it could restart,” Covrig said. Already he’s having to adjust to energy costs that are higher than for some competitors in Europe. He had a scare during Wednesday’s blackout, when power dropped for a few seconds before backups kicked in.

According to Victor Parlicov, previously head of Moldova’s energy regulator, Soviet energy infrastructure was built to help keep the union together, which is why the high voltage cable to Romania needlessly criss-crosses the border with Ukraine.

It’s also why the Soviet leadership attached Transnistria — a slice of mainly Russian-speaking territory on the east bank of the Dniester River — to Moldova when forming the then-republic, and why the main power plant and industries were put there, Parlicov said.

He also sees significance in the date of President Vladimir Putin’s invasion of Ukraine, because Feb. 24 was when a network test was scheduled to separate Ukraine and Moldova from the Russia-Belarus power grid for the first time, so they could trade electricity between themselves and the EU.

“Moldova was always seen by the Soviets as disloyal, and it was,” Parlicov said, because the mainly Romanian speaking region — now independent and bidding for EU membership — had revolted at every opportunity since being absorbed by the Russian empire in 1812. The web of Soviet power and pipelines supplying cheap Russian energy were designed to discourage any repeat.

(Updates to remove garble at beginning of story.)