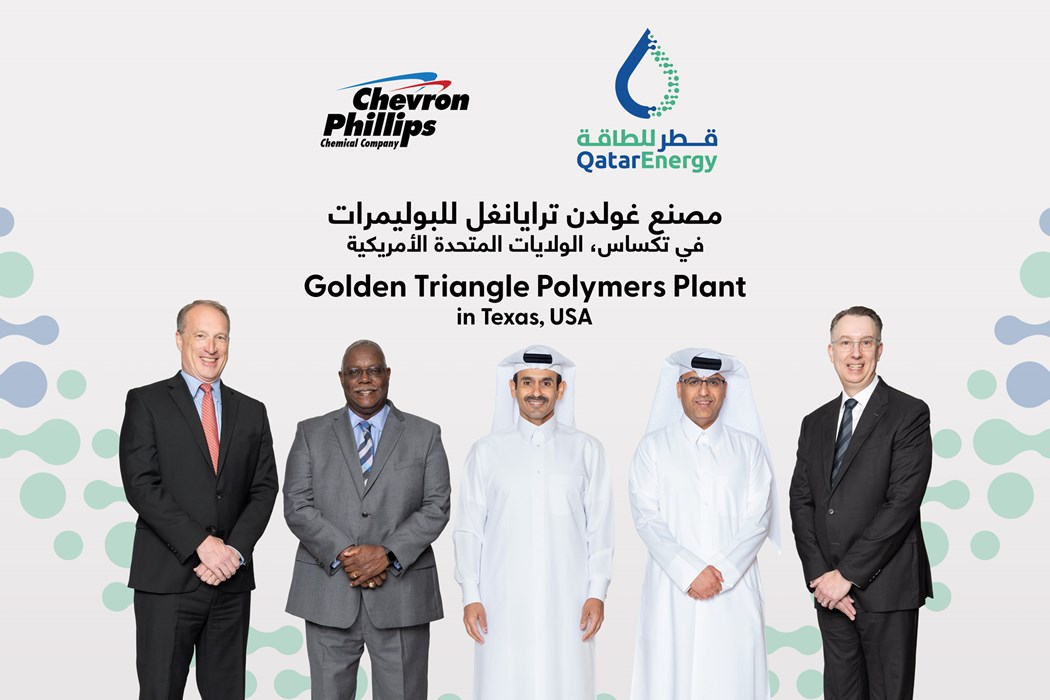 The project is expected to create more than 500 full-time jobs and approximately 4,500 construction jobs.

QatarEnergy and Chevron Phillips Chemical Company LLC (CPChem) announced that they have taken a Final Investment Decision (FID) on the Golden Triangle Polymers Plant, an $8.5 billion world-scale integrated polymers facility in the Texas Gulf Coast area in the United States of America.

Located about 180 kilometers east of Houston, the plant will include an ethylene cracker unit with a capacity of 2.08 million tons per annum, making it the largest in the world, and two high-density polyethylene units with a combined capacity of 2 million tons per annum, also making them the largest derivatives units of their kind in the world. Construction of the plant will begin immediately, with an expected startup date in 2026.

The plant will be owned by Golden Triangle Polymers Company LLC, a joint venture in which QatarEnergy holds a 49% equity interest with 51% held by CPChem.

“We are excited to announce taking the FID on our largest petrochemical investment ever, highlighting QatarEnergy’s integrated position as a major player in the LNG and international exploration sectors, as well as being a global petrochemicals producer,” His Excellency Saad Sherida Al-Kaabi, the Minister of State for Energy Affairs, the President and CEO of QatarEnergy, said in a statement.

“In addition to complementing QatarEnergy’s growing international portfolio, as well as in the United States, this important project will help meet growing global demand for polymers. It also represents a major step in the implementation of our downstream strategy and the next phase of QatarEnergy’s growth, which includes major investments in ethylene, ethylene derivatives and polymers in general,” he added.

The project, expected to create more than 500 full-time jobs and approximately 4,500 construction jobs, is QatarEnergy’s second largest investment in the US after the $11 billion investment (100% basis) in the Golden Pass LNG production and export facility, which is currently under construction and is expected to start up in late 2024.

Minister Al-Kaabi added: “When added to our existing production in Qatar, this new investment will place QatarEnergy amongst the largest petrochemical producers in the world. It will also significantly expand our footprint in the United States, contributing substantially to the communities of the Golden Triangle region of Texas by generating an estimated $50 billion of net economic impact over 20 years”

Once operational, the plant will produce polyethylene, which is used in the production of durable goods like pipe for natural gas and water delivery and recreational products such as kayaks and coolers. It is also used in essential packaging applications to protect and preserve food, helping prevent it from going to landfills, and keep medical supplies sterile. The polyethylene produced by the project will be sold primarily to Asia, Europe and Latin America.

“This new joint venture builds on our long-term and successful partnership with Chevron Phillips Chemical and we look forward to further collaborations in the future,” Al-Kaabi said.

Bruce Chinn, the President and CEO of CPChem, said: “Chevron Phillips Chemical and QatarEnergy have collaborated for over 20 years on the assets we operate together in Qatar. We have a great relationship and a proven track record of operating these facilities safely and reliably. Our products make life better for billions of people every day, and they are part of a lower carbon future. This facility will help meet the growing demand for our products and improve the quality of life for the world’s growing global population.”

The project enjoys special environmental and sustainability attributes that would be reflected in about 25% lower greenhouse gas emissions than similar facilities in the United States and Europe.