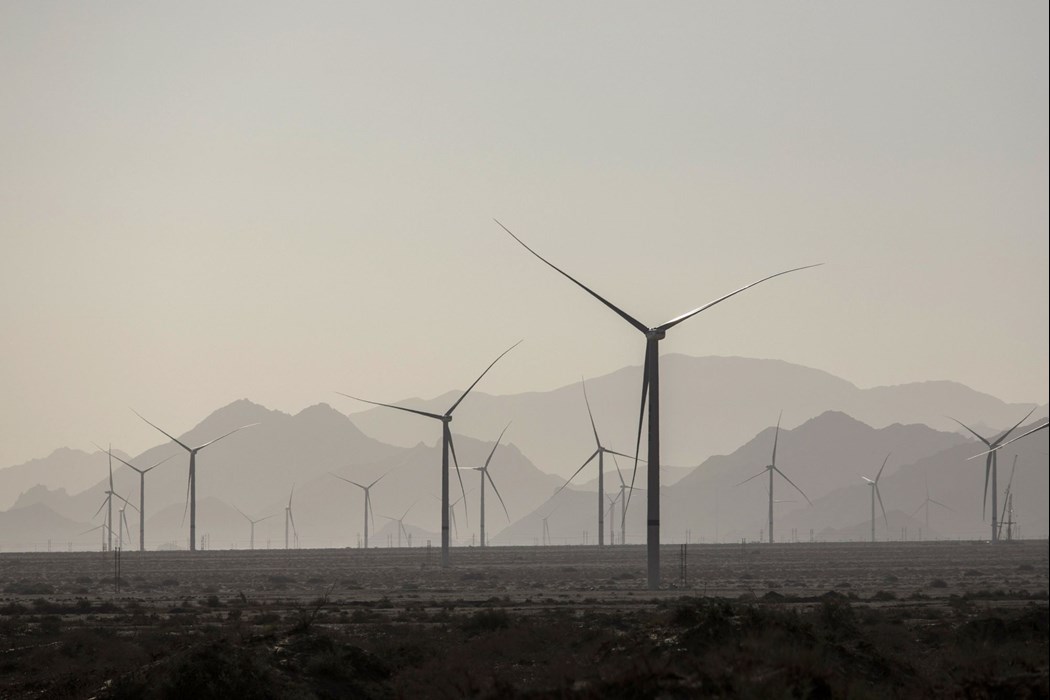 Turbines at a wind farm near Golmud, Qinghai province, China, on Saturday, Sept. 11, 2021. China is opening up its market for trading green energy, making it easier for multinationals from BMW AG to Airbus SE to buy wind and solar power and reach aggressive emissions goals. Photographer: Qilai Shen/Bloomberg

(Bloomberg) -- China’s world-leading ramp-up of clean energy is stuttering as rising costs and Covid restrictions take their toll on the pace of solar and wind installations, heaping pressure on developers to meet their annual targets.

Just 5.6 gigawatts of solar and 1.9 gigawatts of wind capacity were added in October, according to data from the National Energy Administration. Both slowed from September, leaving installations over the year so far at 58 gigawatts for solar and 21 gigawatts for wind, well short of forecasts for 2022 as a whole.

China usually sees a boom in renewable installations toward the end of the year, with December often recording the biggest growth, as developers, especially state-owned ones, rush to hit their annual targets. However, persistent virus curbs and high prices for solar equipment could put the brakes on that effort.

The government hasn’t formally set out the capacity additions it expects for this year, or for the period of the latest five-year plan through 2025, preferring to measure progress via renewables’ share of total energy consumption. But one of the most bullish predictions for 2022 has come from a think tank affiliated with the NEA, which forecast in June that annual installations would reach 100 gigawatts for solar and 56 gigawatts for wind.

China’s Covid count has risen significantly since then. Daily infections are close to the record reached in April, a spike that is testing Beijing’s more targeted approach to containing the virus, and which is likely to worsen with the onset of colder weather. Although the government has avoided the kind of blanket lockdown imposed on Shanghai earlier this year, a total of 48 Chinese cities are now subject to some form of district-level or widespread movement restrictions, according to Nomura Holdings Inc.

One of the biggest developers, China Three Gorges Renewables Group, warned last week that its solar installations will slow. It cited virus disruptions and high costs after a surge in the price of polysilicon drove up panel prices and delayed projects. It also said wind installations had faltered in the first half of the year because of pandemic controls.

Daiwa Capital Markets said the weaker figures for October were disappointing, but reaffirmed its forecast that a record 90 gigawatts of solar and 55 gigawatts of wind would be added in 2022, according to a research note. Tianyi Zhao, an analyst at BloombergNEF, also said she expects over 90 gigawatts of solar, and that the impact of virus restrictions would slowly weaken next year.

State-owned firms will be under political pressure to meet their targets and have a relatively higher tolerance when it comes to investment returns, Zhao said. “If installations can’t meet expectations this year, it will be very difficult for provinces to achieve their installation targets for the 14th five-year plan.”

(All times Beijing unless noted otherwise.)

Europe and the US are becoming much more important drivers of metals demand -- in a tilt away from China -- as the emerging energy transition boosts usage of materials such as copper, according to the chief of commodities trading giant Trafigura Group.

China’s crude buyers have paused purchases of some Russian oil as they wait to see if a US-led cap presents a better price.

The first vessel carrying Brazilian corn to China is set to sail Wednesday after a deal earlier this year between the two nations.