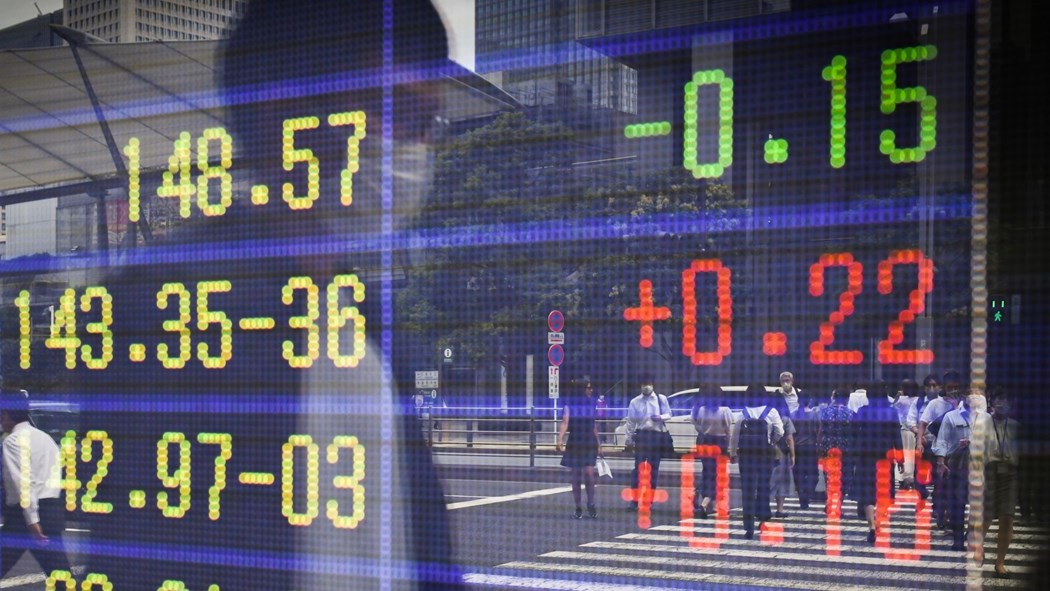 The rate of the US dollar against the yen, second row, displayed on an electronic stock board outside a securities firm in Tokyo.

(Bloomberg) -- Stocks declined in a cautious start on Monday as investors await a slew of interest rate decisions in the days ahead and after global equities notched their worst week since hitting this year’s low in June.

Shares dropped in Hong Kong, Australia and South Korea, along with US stock futures. Trading may be muted by a holiday in Japan and the UK observing a day of mourning for Queen Elizabeth II, with no trading in cash Treasuries during the Asian and European sessions.

The S&P 500 index fell almost 5% last week in its worst performance since June 17 while the rate sensitive 2-year Treasury yield ended at 3.87%. The weakness in markets reflects expectations for an outsized interest rate hike from the Federal Reserve on Wednesday and worries that its aggressive tightening to quell inflation will trigger a recession.

Investors also face potential volatility from policy decisions this week by the Bank of England, the Bank of Japan and a host of other central banks. The British pound sank to its weakest level against the dollar since 1985 on Friday and the yen remains under pressure, though it has backed off from just below the key 145 level versus the dollar. A gauge of the greenback was little changed.

“We need to wait until the Fed hike, and then need to understand the dot plot,” Wendy Liu, chief Asia and China equity strategist at JPMorgan Chase & Co. said on Bloomberg TV.

The slump in global stocks deepened after hotter-than-expected inflation data spurred traders to ratchet up wagers for rate hikes. Swaps continue to price in a 75 basis-point hike when the Fed meets -- with some wagers leaning toward a full point.

Traders briefly priced the Fed’s key policy rate peaking at 4.5% in March last week as the central bank escalates its effort to contain inflation. That expected peak was up by a full percentage point since the Fed’s last policy meeting in July.

“It is clear that the Fed will project hawkish messaging, once again re-iterating that it will bring down inflation unconditionally,” Vasileios Gkionakis, head of European currency strategy at Citigroup Inc. wrote in a note to clients. While Fed hawkishness is already priced in, much will depend on “pre-positioning in the few days before.”

Oil climbed toward $86 per barrel as the Chinese city of Chengdu ended a two-week lockdown, boosting the outlook for demand. The offshore yuan extended its decline against the dollar even after the People’s Bank of China set a reference rate with a record bias toward the strong side after it warned companies against shorting the currency last week.

Cryptocurrencies were also weighed by pre-Fed jitters. Bitcoin fell below $19,000 while Ether extended its drop after its blockchain was upgraded last week.

Some key events this week: