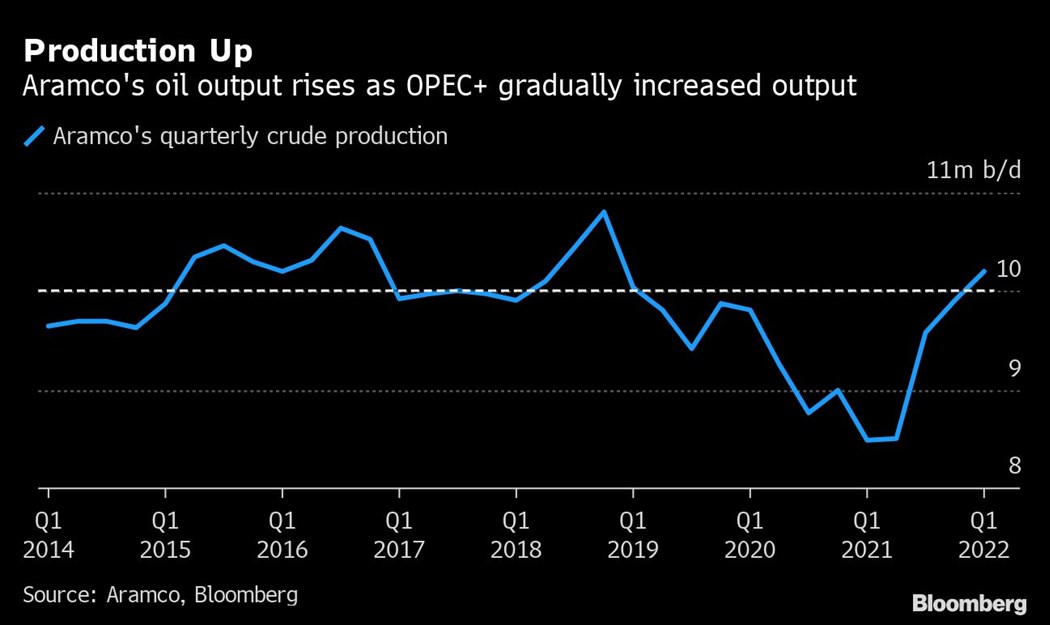 Saudi Aramco posted its highest profit since its record stock-market listing, after oil prices surged in the wake of Russia’s invasion of Ukraine.

Aramco, which last week surpassed Apple Inc. to become the world’s most valuable company, followed Big Oil rivals such as Shell Plc and BP Plc in reporting bumper earnings for the first quarter. Like them, the Saudi Arabian firm’s results were boosted by crude’s jump to $110 a barrel after Moscow’s attack in late February.

State-controlled Aramco made net income of $39.5 billion, up 82% from a year earlier, when global demand from energy was still severely suppressed by the coronavirus pandemic.

The company’s free cash flow rose almost to $31 billion, though it opted to keep its quarterly dividend unchanged at $18.8 billion. That enabled Aramco to reduce its leverage. Gearing, a measure of debt to equity, fell from 14% in December to 8% at the end of March. The gauge spiked above 20% during the pandemic as profit slumped, forcing Aramco to borrow more.

Aramco has benefited this year not just from oil climbing about 45%, but also from Saudi Arabia gradually increasing production along with other members of OPEC+. The kingdom’s output averaged 10.2 million barrels a day between January and March, up 20% year-on-year.

Production is meant to keep growing until at least September, when the current agreement between the Organization of Petroleum Exporting Countries and its partners -- a 23-nation group led by the Saudis and Russia -- expires.

Aramco’s shares rose 1.5% to 41.25 riyals early on Sunday, extending this year’s gain to 27%. The company raised almost $30 billion with an initial public offering in Riyadh in late 2019, though it’s still 98% owned by the government. It is now valued at $2.4 trillion.

Saudi Arabia is one of the few major petroleum producers trying to boost output capacity significantly. Many others are cutting back on exploration as they shift to renewable energy and try to curb their greenhouse gas emissions. The Saudis have blamed the run up in prices on the fall in investment and said demand for oil and gas will stay strong for decades.

Aramco is spending billions of dollars to increase its crude production capacity to 13 million barrels a day from 12 million by 2027. It’s also aiming to raise natural gas output by more than 50% by 2030. On Sunday, Aramco said it should finish gas projects at Hawiyah and Haradh this year, enabling it to pump an extra 1.3 billion cubic feet a day.

The world’s biggest energy producer said it would continue expanding downstream operations, which include refining, trading and chemicals subsidiary Sabic. During the quarter, Aramco bought a stake in a Polish refinery and said it would supply more oil to the eastern European country. It also agreed to invest in a 300,000-barrel-per-day refining and petrochemicals complex in China.

Aramco said it made an early repayment of $8 billion owed to Saudi Arabia’s sovereign wealth fund. The money backed the $69 billion takeover of a 70% stake in Sabic in 2020. Aramco is repaying the Public Investment Fund in installments until 2028.

(Updates from fourth paragraph with details on cash flow, gearing.)

Gazprom exports goes down by 26.5% to non former Soviet countries