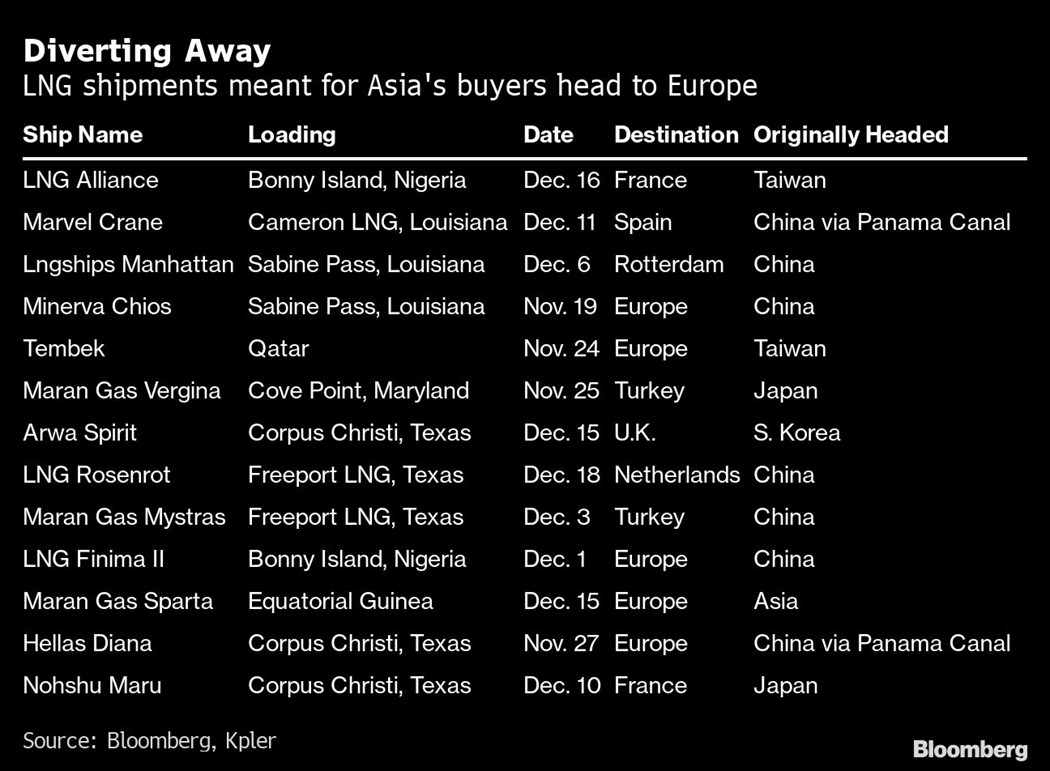 More natural gas cargoes are being diverted away from China to Europe, as traders spend hundreds of thousands of dollars to take advantage of a rare price premium before it disappears.

(Bloomberg) -- More natural gas cargoes are being diverted away from China to Europe, as traders spend hundreds of thousands of dollars to take advantage of a rare price premium before it disappears.

Thirteen liquefied natural gas carriers shipping supply mainly from the U.S. and West Africa are re-routing to Europe instead of Asia, according to shipping data from Kpler and Bloomberg. That’s up from about eight ships spotted a week earlier. In one case, traders are sending a ship back through the Panama Canal, paying canal charges of almost $400,000 for a second time, according to Bloomberg estimates.

Sellers have been sending tankers halfway around the globe on expensive detours as an energy crunch in Europe has made gas on the continent pricier relative to Asia. But as more cargoes flood into Europe to help ease the crisis, the arbitrage window is closing quickly and may not last for shipments arriving in February.

Japan-Korea benchmark prices traded at $29.356 per million British thermal units on Tuesday, according to S&P Global Platts, almost at parity to Dutch TTF futures. That compares to a discount of $7 in December.

Still, Asia prices could also be weighed down by weaker demand from China, even as colder weather hits Northeast Asia, said traders. Cargoes are turning away from China as factory activity has dropped before the Lunar New Year holidays and pollution curbs take effect ahead of the Winter Olympics.

LNG that was originally meant to be delivered to Tianjin in China’s north in January is being diverted to other ports in Asia as well as Europe as demand slows more than expected, said Mathew Ang, an analyst at Kpler.

Oil Trades Above $80 a Barrel Amid Supply Constraints