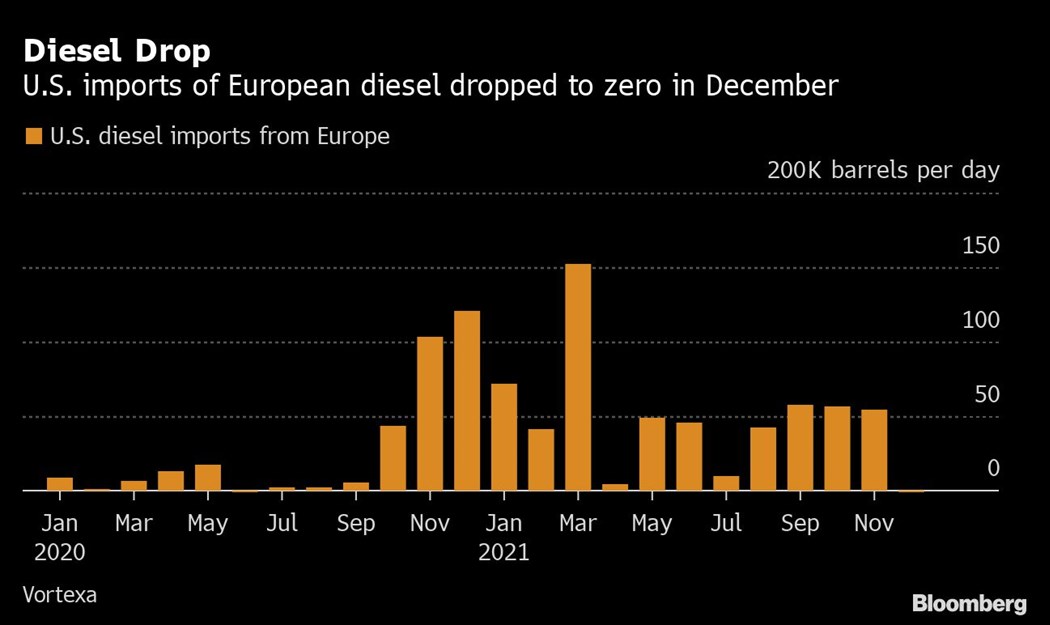 European refiners are planning to send more diesel than usual to the U.S., where inventories of the fuel are low and a cold snap has gripped the Northeast, boosting demand for heating fuels.

(Bloomberg) -- European refiners are planning to send more diesel than usual to the U.S., where inventories of the fuel are low and a cold snap has gripped the Northeast, boosting demand for heating fuels.

Two relatively large tankers have been provisionally booked to ship more than 1 million barrels combined of ultra-low-sulfur diesel to the U.S. East Coast, according to fixture reports compiled by Bloomberg. The U.S. generally sends diesel to Europe, which in turn ships gasoline to America.

“The main factor driving these trans-Atlantic flows is the low stockpiles of diesel in the U.S,” said Koen Wessels, a senior oil products analyst at Energy Aspects Ltd. Another reason is the cold front heading to the Northeast where a lot of diesel is consumed in the form of heating oil, he added.

East Coast inventories of distillate fuel are at the lowest level for the time of year since 2015, data from the U.S. Energy Information Administration show.

Shipments of European diesel to the U.S. rose in the last quarter of 2020 as American refiners reduced operations following a pandemic-related collapse in demand, data from industry consultant Vortexa Ltd. show. U.S. imports of diesel and gasoil averaged about 53,000 barrels a day through the first eleven months of 2021, then dropped to zero in December -- the first time that’s happened since mid-2020.

Some refinery closures in the U.S. have reduced plants’ ability to supply fuels, according to Steve Sawyer, director of refining at Facts Global Energy. In addition, demand recovery in the U.S. has been better than in Europe, he said.

“However, Europe is still short diesel and exporting any significant volume to another region will be limited,” Sawyer added. “Opportunistic unusual moments, like a weather event, can prompt traders to shift barrels from Europe to the U.S. to meet the peak in demand.”