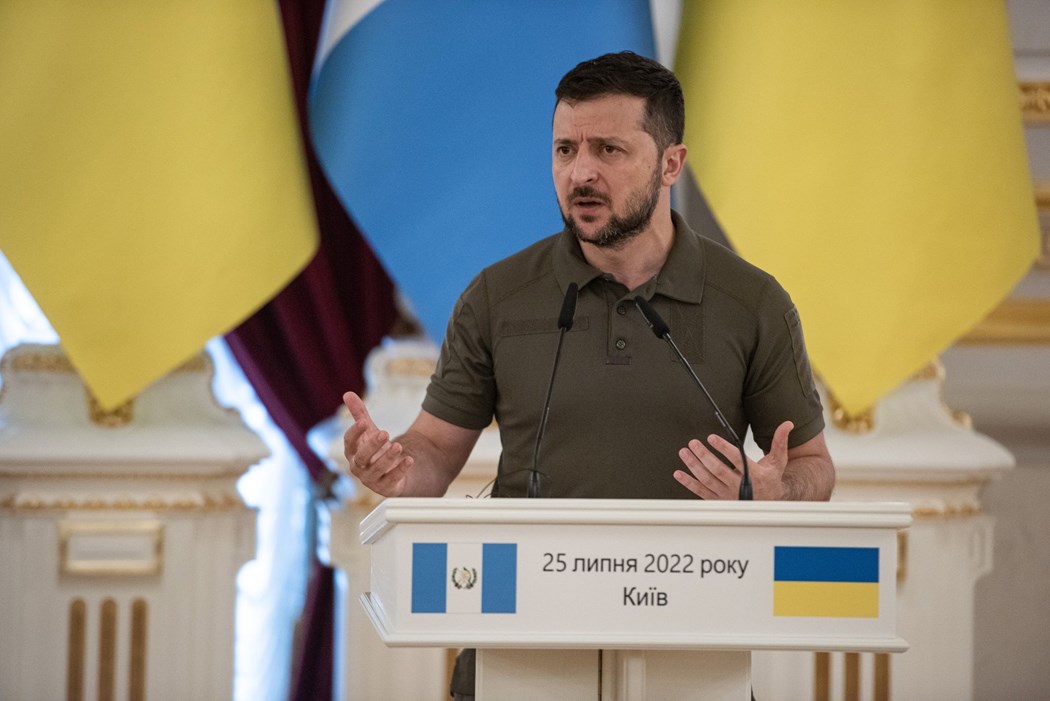 (Bloomberg) -- Russian crude flows through Ukraine to Hungary, Slovakia and the Czech Republic were halted because sanctions prevented payment of a transit fee, dealing a fresh blow to Europe’s energy security.

Ukrainian President Volodymyr Zelenskiy expressed his gratitude to US President Joe Biden for what he called “another unprecedented security aid package” to help the country defend itself against Russia’s invasion.

“Every dollar of such aid is a step towards defeating the aggressor,” Zelenskiy said in a tweet. A Pentagon official said as many as 80,000 Russians may have been killed or wounded in Ukraine.

Amid continuing safety concerns around the nuclear power plant at Zaporizhzhia -- the world’s largest -- the Institute for the Study of War said that Russian forces have dug trenches in and around the facility. Kremlin officials have accused Ukraine of repeatedly attacking the plant, while Ukrainian officials have said that Russian forces are attacking their positions from within it and essentially using it as a shield, according to the ISW’s latest report. Russian forces also continued ground assaults to the northwest and southwest of the eastern city of Donetsk, the Washington-based institute said. The city of Kharkiv in the northeast was shelled overnight, according to local authorities.

A merchant ship under US sanctions passed Turkey’s Bosphorus Strait on its way from Syria to Russia late last month, carrying what European intelligence officials say were military vehicles as the Kremlin seeks to bolster its invasion of Ukraine.

The Sparta II’s journey to the Black Sea port of Novorossiysk underlines Russian efforts to tap available resources at home and abroad as supply lines strain under the pressure of Europe’s largest military campaign since World War II. While Ukraine has received billions of dollars of weapons from the US and Europe to help defend itself, Russia must rely on its own reserves to support frontline forces.

Read more: Russia Is Scouring the Globe for Weapons to Use in Ukraine

Russia’s Defense Ministry said munitions exploded at a military air base in Crimea, without causing any casualties or damage to aviation equipment.

The ministry said it’s investigating the incident, which it said wasn’t caused by an incoming strike, the Tass state news service reported. Videos of explosions and large plumes of smoke were shared on social media, prompting speculation of a Ukrainian missile strike.

Local officials in Crimea, which Russia annexed from Ukraine in 2014 and is being used as a base for the invasion of the neighboring country, said they ordered a 5-kilometer (3.1 mile) exclusion zone around the air base.

Russia’s current-account surplus more than tripled from last year after notching record levels since the invasion of Ukraine, as declines in imports combined with booming revenues from energy and commodity sales abroad.

Flows of Russian crude oil via Ukraine to Hungary, Slovakia and the Czech Republic were halted last week after sanctions prevented Russia from paying a transit fee, according to the nation’s pipeline operator Transneft PJSC.

Ukrtransnafta, which operates Ukraine’s oil pipeline network and supplies crude via the southern leg of the Druzhba link, halted Russian deliveries on Aug. 4, Transneft said. Flows via the northern leg of the link to Poland and Germany are unaffected.

Hungarian discount carrier Wizz Air Holdings Plc’s Gulf venture said it plans to resume daily flights to Moscow from Abu Dhabi from Oct. 3 even as sanctions imposed over the invasion of Ukraine continue to outlaw services from the European Union.

Wizz Air Abu Dhabi is majority owned by Abu Dhabi’s state-backed holding company ADQ, with Wizz owning only a 49% stake. Airlines in the UAE have continued services to Russia in the absence of local sanctions, with Dubai-based Emirates, the world’s largest long-haul airline, pledging to carry on flying there for as long as it is told to do so by its government owner.

Denis Pushilin, head of the self-declared Donetsk people’s republic in eastern Ukraine, said he’s expecting North Korea to send construction workers to territories occupied by Russia. “We need builders. We are in talks to have workers from North Korea,” Pushilin said, according to Russian state media.

North Korea announced last month it was recognizing the Kremlin-backed Donetsk and Luhansk peoples’ republics, following a similar move by Russian President Vladimir Putin in February. Russia is preparing to stage referendums there as soon as next month as a potential pretext for annexation.

Russia May Give Up Majority in Development Bank (10 a.m.)

Russia plans to give up its majority stake in Eurasian Development Bank, formed by six former Soviet states to promote economic integration, to reduce the risk the lender will be targeted by sanctions, according to three people with knowledge of the plan.

Russia, which holds 65.97% in the bank, wants to reduce its combined stake with Belarus to less than half, according to the people, who asked not to be identified because the plans are not public. Kazakhstan may end up as controlling shareholder if a deal goes through, two of the people said. Russia was hit with restrictions on financing, imports and technology after it invaded Ukraine, and authorities are seeking to further fortify the country’s institutions from additional measures.

Colin Kahl, US under secretary of defense for policy, said that as many as 80,000 Russian troops have probably been killed or wounded in Ukraine in less than six months. Russia last published information on casualties in late March, when it said 1,351 had been killed and 3,825 wounded.

Conditions in the east have stabilized and the focus has shifted to the south, leading to Russia being “forced to redeploy their forces down there,” Kahl said Monday at a news conference. “Both sides are taking casualties, the war is the most intense conventional conflict in Europe since the Second World War, but the Ukrainians have a lot of advantages, not the least of which their will to fight,” he added, according to a transcript.

Shelling at and around the Zaporizhzhia plant has caused “significant damage” to some of its infrastructure, including close to dry storage for spent nuclear fuel inside the plant’s perimeter, European Union Energy Commission Kadri Simson said, condemning Russian forces for what she called “reckless behavior.”

Simson said the EU’s radioactivity monitoring systems don’t indicate any increase of radiation in the bloc or Ukraine, but said any military activity near the plant is “unacceptably dangerous.”

The closer coordination is intended to address “regular” violations by Russian military aircraft and vessels in the region. Denmark’s defense minister, Morten Bodskov, cited an episode from June 17 when a Russian warship twice entered Danish waters near its Bornholm island, according to DR.

The Ocean Lion is carrying 64,720 tons of corn to South Korea while the Rahmi Yagci is carrying 5,300 tons of sunflower meal to Turkey, the ministry said. The shipments may gradually bring relief to squeezed global markets, but many challenges remain before the millions of tons of food still stuck in Ukraine can be released.

US Gets Warrant to Seize Russian’s Plane (9 p.m.)

The US got a warrant to seize a $90 million private Airbus plane owned by a member of the Russian Duma who allegedly has ties to organized crime.

A judge on Monday signed a warrant permitting officials to seize the plane belonging to Andrey Skoch, according to a statement by Manhattan US Attorney Damian Williams. The plane is currently located in Kazakhstan, according to legal papers.

The US is providing Ukraine an additional $4.5 billion in direct budgetary support, using a World Bank-managed program to mobilize the funds. The first $3 billion will be distributed this month, and is the fifth US disbursement to the Ukrainian government, the US Treasury said in a statement.

“This economic assistance is critical in supporting the Ukrainian people as they defend their democracy against Russia’s unprovoked war of aggression,” Treasury Secretary Janet Yellen said. Once the additional funds are fully disbursed, the US will have provided a total $8.5 billion in direct budgetary support to Ukraine.

Russia said it has informed the US that it is halting American inspections of its nuclear weapons sites under the New START treaty in protest at what it described as efforts by Washington to maintain unequal access.

The Foreign Ministry in Moscow said the ban on flights from Russia to the US and allied countries and visa restrictions for transit countries meant that Russian inspectors are unable to travel to the US, while American inspections are proceeding unhindered. “We would like to stress that these are temporary measures,” the ministry said in a statement on its website.

The US package includes long-range artillery munitions, anti-tank weapons and medical vehicles and supplies, the Defense Department said in a statement.

It’s the 18th drawdown of Pentagon inventories since August 2021 and brings the total of US security assistance to Ukraine under the Biden administration to about $9.8 billion.

UK Plans for Blackouts in January in Emergency Energy Plan