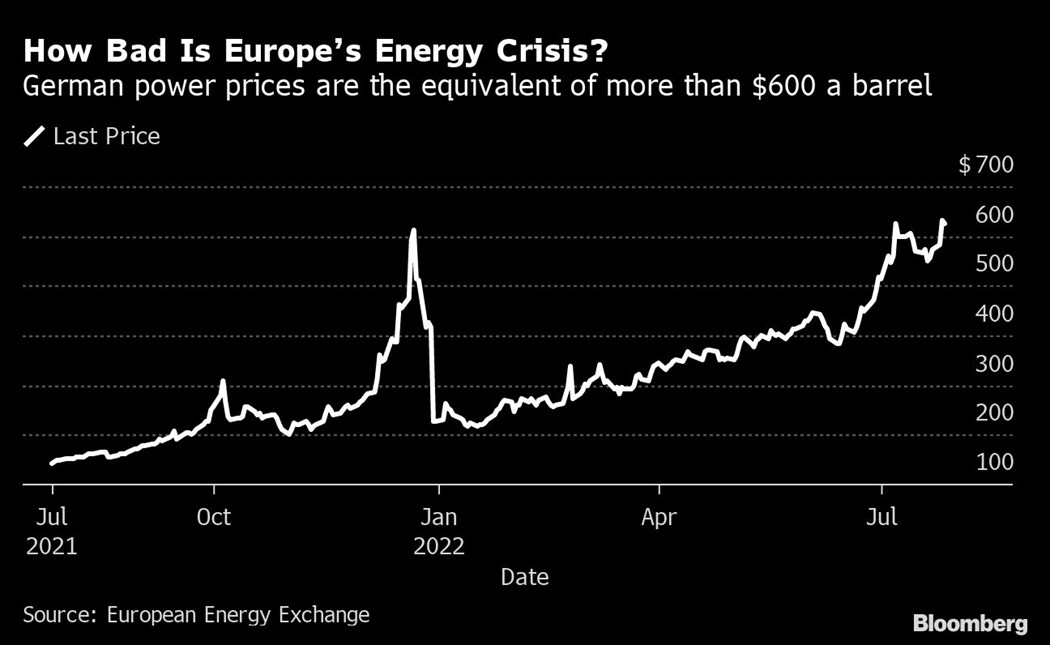 (Bloomberg) -- Ukraine said Russia shelled areas around the Zaporizhzhia nuclear plant again on Saturday. The head of the UN’s atomic agency has warned of “potentially catastrophic consequences” of military action around the plant. Russia has denied involvement.

A second caravan of vessels sailed early Sunday from Ukraine’s Black Sea ports carrying grains and foodstuffs, Ukraine’s infrastructure minister said. Late Saturday, the first incoming cargo ship since the signing of a safe-transit agreement last month between Ukraine and Russia arrived for loading. A corn cargo expected to arrive in Lebanon has been delayed.

Ukraine’s general staff on Sunday reported Russian artillery shelling in the direction of Kharkiv “along the entire line of contact.” There was also artillery fire in the Kramatorsk area including near Slovyansk, and Russian craft carried out air strikes near Bakhmut and in places toward Avdiyivka. Kyiv’s forces repelled Russian assaults in several eastern areas and fighting continues in some of them, according to the statement. Russia also fired from tanks and artillery along the contact line in the South Buh direction, and conducted air strikes near Andriyivka, Bilohirka, and Velyke Artakovo. Ukrainian aviation and missile and artillery units continue attacking concentrations of Russian manpower, equipment and ammunitions warehouses, it said. An extended curfew remains in place in Mykolaiv, where three people were killed and 15 injured in shelling on Saturday.

The evening attack was “apparently” aimed at open-air casks storing spent fuel, Energoatom said. The shelling also damaged radiation monitoring detectors, it said, adding that as many as 500 Russian servicemen at the occupied plant retreated to bunkers during the shelling.

“This time a nuclear catastrophe was miraculously avoided, but miracles cannot last forever,” Energoatom said. The UN’s nuclear agency has warned of “potentially catastrophic consequences” of military action around Zaporizhzhia, where Russian troops have set up a base since capturing the plant in March.

A vessel with Ukrainian corn expected to arrive in Tripoli, Lebanon, on Sunday -- the first under the safe-transit deal signed on July 22 -- has been delayed, a Lebanese minister said. The cause wasn’t immediately clear.

The Razoni left Odesa on Aug. 1 and transited through Turkey for inspection. The tracking website vesselfinder.com shows the ship anchored in the Mediterranean Sea near Turkey. Its status changed on Saturday to “order,” meaning the ship is waiting for someone to buy the corn.

The head of Amnesty International in Ukraine quite amid fallout from a report the human rights group published that criticized Kyiv’s military tactics as endangering its own civilians. Oksana Pokalchuk disavowed the report on Thursday, and in a lengthy Facebook post said that “seeking to protect civilians, this study instead has become a tool of Russian propaganda.”

“If you don’t live in a country that’s been invaded by invaders and tearing it apart, you probably don’t understand what it is like to condemn the army of defenders,” Pokalchuk wrote late Friday.

President Volodymyr Zelenskiy again criticised Amnesty International in remarks to the nation Saturday night, noting that the group hadn’t commented on Russian shelling near the Zaporizhzhia nuclear power plant on Friday. “A very eloquent silence, which once again indicates the manipulative selectivity of this organization,” he said. Moscow has said Ukraine was responsible for the incident.

Mykhailo Podolyak, a top adviser to Ukraine’s president, urged Germany to keep its nuclear power plants running as Russia continues to choke gas flows to Europe, according to Tagesspiegel.

“We must urgently use everything we have to create a new energy map for Europe as quickly as possible to stop financing Russia’s war,” Podolyak said in an interview published Sunday in Tagesspiegel.

The Ukrainian directed his remarks at the Germany’s Green Party, which has led the movement to exit nuclear power and largely opposed proposals to delay the plan to ease the energy supply crunch.

Read more: Germany Has Three Months to Save Itself From a Winter Gas Crisis

Late Saturday, the cargo ship Fulmar S arrived at Chornomorsk, the first incoming vessel since Russia’s invasion of Ukraine. “Our next step is to ensure the ability of Ukrainian ports to handle more than 100 vessels per month,” Kubrakov said.

At least six Russian commanders have probably been relieved of their posts since the Feb. 24 invasion of Ukraine due to the “poor performance” of the nation’s armed forced, the UK defense department said.

The dismissals are compounded by at least 10 Russian generals killed on the battlefield, the UK said in a Twitter thread.

“The cumulative effect on consistency of command is likely contributing to Russian tactical and operational difficulties,” it added.

The director general of the UN’s International Atomic Energy Agency made his first public comments after Friday’s shelling near Ukraine’s Zaporizhzhia nuclear power plant, calling it “the latest in a long line of increasingly alarming reports.”

The incident “underlines the very real risk of a nuclear disaster that could threaten public health and the environment in Ukraine and beyond,” Rafael Grossi said in a statement.

Military action around the plant -- which Russia occupied in March but is still being operated by Ukrainian personnel -- “must be avoided at all costs,” he said.

The move would be the latest in a bid to consolidate administrative control of occupied areas. Ukrainian civilians are being required to acquire Russian passports to participate in many basic life activities, including registering their cars.

Germany Warns of Energy Crisis as Soon as December (2:20 p.m.)

Germany needs to lower gas use by at least 20% or face an acute shortage as soon as December, the president of the Federal Network Agency said.

Klaus Mueller, in an interview published Saturday by Welt am Sonntag, said Germany needs to plan for two winters in which the country still needs Russian gas. His latest warning reflects the pressure caused by Russia cutting gas flows through the key Nord Stream 1 pipeline to 20% of its normal capacity.

Germany is debating whether to postpone its planned exit from nuclear energy to ease the energy crunch. Wolfram Koenig, head of Germany’s Office for the Safety of Nuclear Waste Management, called for new assessments nuclear security in the context of the war in Ukraine, according to an interview published Saturday in Tagesspiegel.

Ukraine’s first grain exports since being invaded by Russia are bringing relief to squeezed global markets, but challenges remain before the millions of tons stuck in the country can move.

Among them is caution among shipowners about sending their vessels into harm’s way, as the Black Sea waters are littered with mines and Russia didn’t hesitate to strike the port of Odesa a day after the safe-passage agreement was signed.

Officials with knowledge of the insurance market quoted a wide range of figures for covering the nation’s cargoes, with most of the numbers looking prohibitive for the trade.