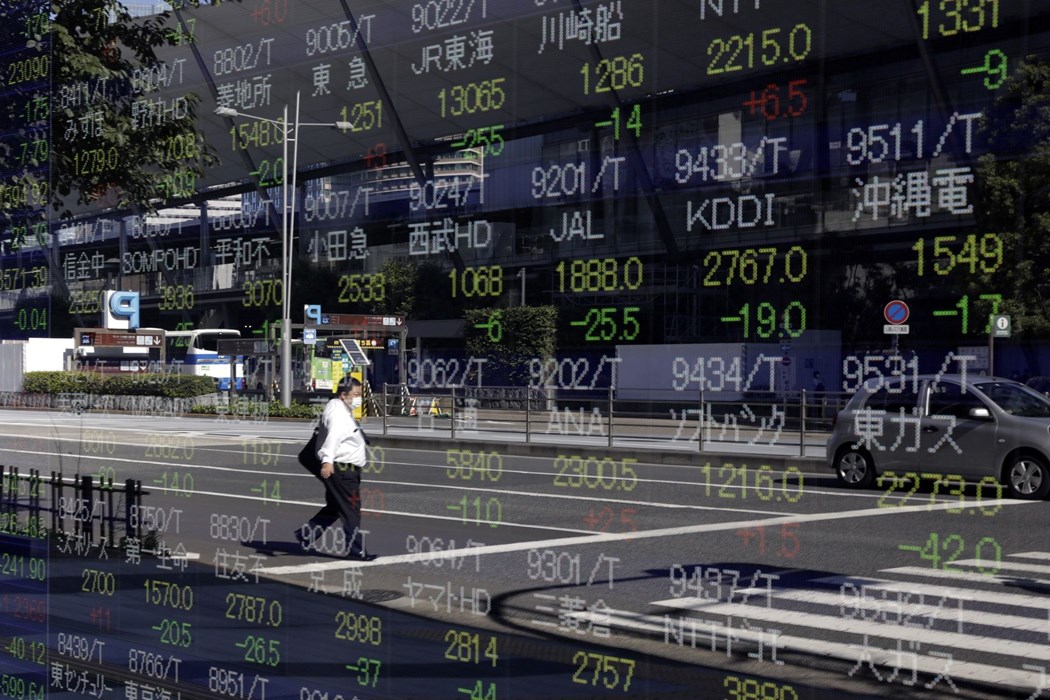 A pedestrian wearing a protective face mask is reflected in an electronic stock board outside a securities firm in Tokyo, Japan, on Thursday, Oct. 29, 2020. Japanese stocks pared losses after the Bank of Japan’s policy decision and as U.S. futures bounced back following a global equity rout. Photographer: Kiyoshi Ota/Bloomberg

(Bloomberg) -- Stocks in Asia resisted mounting signs of a sharp economic slowdown that are weighing on bond yields and commodity prices, a schism underlining some of the tension in global markets.

An Asia-Pacific equity index was propped up by modest gains in China and Hong Kong. Stocks and dollar bonds of Chinese developers rallied on a possible move to let state-owned firms guarantee the sale of new onshore notes. S&P 500 and Nasdaq 100 futures were steady while European contracts rose.

By contrast, demand for havens helped Treasuries extend an advance and spurred purchases of Australian and New Zealand debt. Oil slid below $89 a barrel on worries about demand as well as the possible return of Iranian supplies. A dollar gauge was firm.

Bets on cooling inflation and less punitive monetary tightening as the world economy slows have contributed to a near 13% rebound in global equities from June lows. The danger for the bounce lies in the possibility of persistent price pressures that keep borrowing costs higher for longer, leading to recession.

The Federal Reserve minutes this week will probably give a hint of the scale of the next interest-rate hike, Jin Yuejue, multi-asset solutions investment specialist at JPMorgan Asset Management, said on Bloomberg Radio.

“We’re of the view that there’s more work for Fed to do,” she said, adding she expects the US to raise rates by another 100 basis points this year.

US data showed a gauge of New York state manufacturing activity plunged by the second-most in figures going back to 2001. US homebuilder sentiment fell for an eighth-straight month, the worst stretch since the 2007 housing collapse.

Those reports followed an unexpected cut in interest rates by China on Monday ahead of figures showing the nation’s economic slowdown deepened in July. The offshore yuan stabilized after sinking in the wake of the disappointing data and monetary steps.

“The risk of the markets going below the June lows is quite high,” Shane Oliver, head of investment strategy at AMP Services Ltd., said on Bloomberg Television. Sagging economic data presage “weaker” US earnings, he added.

Here are some key events to watch this week:

Iran Vows to Give Response on Nuclear Deal Text on Monday