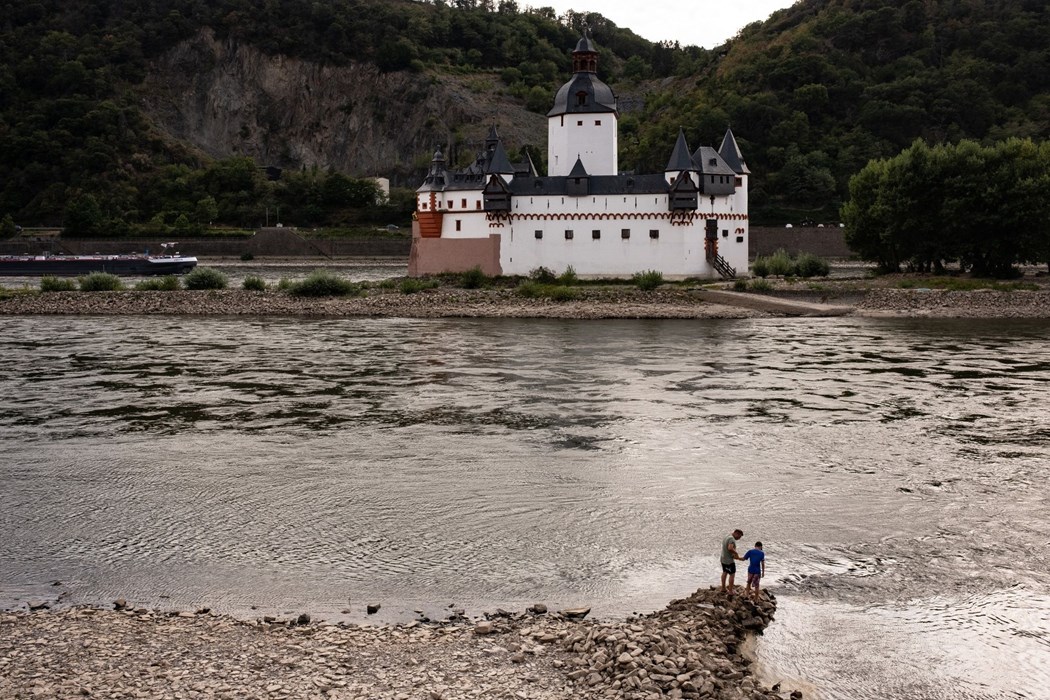 Visitors walk along exposed rock on the shoreline of the River Rhine near Pfalzgrafenstein castle in Kaub, Germany, on Thursday, Aug. 4, 2022. An extended dry spell at the Rhine -- a key hard-coal import route -- risks choking Germany's energy supply further, stoking power-price volatility and elevating costs for coal-heavy generators, such as EnBW and Uniper.

(Bloomberg) -- The Rhine River is set to become virtually impassable at a key waypoint in Germany, as shallow water chokes off shipments of energy products and other industrial commodities along one of Europe’s most important waterways.

The marker at Kaub, west of Frankfurt, is forecast to drop to the critical depth of 40 centimeters (just under 16 inches) early on Aug. 12, according to the German Federal Waterways and Shipping Administration. At that level, most barges that haul goods from diesel to coal are effectively unable to transit the river. It’s set to continue dropping, to 37 centimeters the following day.

Europe is facing its worst energy crisis in decades as Russia curbs natural gas flows, with regional tensions high over its invasion of Ukraine. That’s sent prices soaring and pushed companies to use more oil and coal instead. The energy crunch has spilled over into the broader economy, sending factory costs surging and threatening to push some of the continent’s largest economies into recession.

While some shallow-water barges will still be able to navigate the Rhine at Kaub, the dwindling water level illustrates how a climate crisis is compounding the region’s energy woes. Benchmark German power prices jumped to a new record on Wednesday. European natural gas and coal futures also surged.

Used by vessels to haul vital commodities, the Rhine snakes about 800 miles (1,300 kilometers) from its source high in the Swiss Alps through some of Europe’s most important industrial zones before emptying into the North Sea near Rotterdam. Companies including chemicals giant BASF SE and steelmaker Thyssenkrupp AG rely on the river to supply major industrial plants with fuels and raw materials.

A mix of glacial run-off and rain feeds the river, but contributions from glaciers have dwindled in recent years as summer melting outpaces winter ice formation due to climate change. Below-average snowfall last winter and continued glacial attrition mean the waterway is particularly likely to fall to crisis levels, according to Switzerland’s federal weather service.

When the marker at Kaub hits 40 centimeters or less, it becomes uneconomical for most barges to sail any further, a representative of Germany’s Federal Institute of Hydrology said previously. That effectively halts the flow of most shipments beyond the waypoint.

The measured water level isn’t the actual depth of the river, but rather a marker for navigability. Shipments have already been hampered for weeks, with low water limiting how much barges can carry. The rate to haul some fuel to Basel in Switzerland is now 267 euros ($276) a ton, compared with about 25 euros a ton in early June, data from Insights Global show.

Barges are still passing the key chokepoint on the river at Kaub, an official from the WSA, the German state waterways agency, said Wednesday by phone. He expects barges to continue to operate until the Kaub marker drops by about 20 centimeters from current levels.

The low levels could cause planning headaches for BASF and utilities EnBW AG and Uniper SE -- the latter of which recently received a $17 billion bailout from the German government to prevent a collapse of its energy network. While the companies will still be able to supply factories and power plants by road or rail, those modes of transport are significantly more expensive, leading to a squeeze on margins.

Further downriver, Thyssenkrupp is closely monitoring water levels at Duisburg, near Cologne. The river depth there currently stands at 173 centimeters, with 150 centimeters seen as the level that makes it uneconomical to transport materials like coking coal and iron ore by barge.

UK Plans for Blackouts in January in Emergency Energy Plan