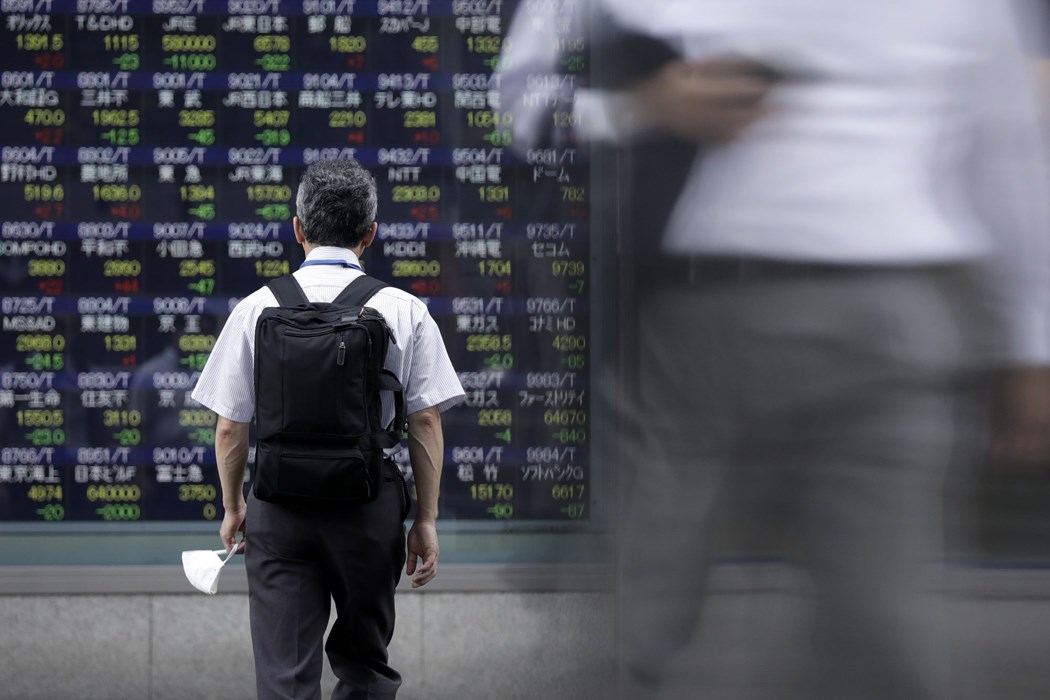 A pedestrian crosses a road in front of an electronic stock board outside a securities firm in Tokyo, Japan, on Thursday, Sept. 17, 2020. Japanese stocks were set for their fourth straight weekly gain, the longest winning streak since November, as investors moved back in following this week’s central bank rate decisions at home and in the U.S. Photographer: Kiyoshi Ota/Bloomberg

(Bloomberg) -- Stocks in Asia climbed along with US equity futures on Friday, helped by gains in technology shares, and oil snapped a slide as investor sentiment steadied after another turbulent week.

The 10-year Treasury yield was steady at about 2.68% and the dollar edged up. The inversion between two-year and 10-year yields remained near the deepest since 2000, indicating worries about a recession as monetary policy tightens.

A global equity index is set for a third weekly advance and near a two-month peak in a recovery from bear-market lows, helped by resilient US company profits. The durability of the bounce remains in doubt as borrowing costs go up.

“It’s a little too early to say the risk is off the table,” Carol Schleif, deputy chief investment officer at BMO Family Office, said on Bloomberg Television. “Significant slowing” is starting to come in parts of the US economy, she said.

US payrolls Friday are the next key data point for markets. Hiring likely softened in July but the labor market remains consistent with an expanding rather than recessionary economy and the Fed will press on with rate hikes, according to Anna Wong, chief U.S. economist for Bloomberg Economics.

Separately, Democrats agreed on a revised version of their tax and climate bill, adding a new 1% excise tax on stock buybacks.

Investors are also monitoring the aftermath of Pelosi’s visit to Taiwan. China, which regards the self-ruled island as part of its territory, reportedly fired missiles over Taiwan during military drills -- a major escalation if confirmed.