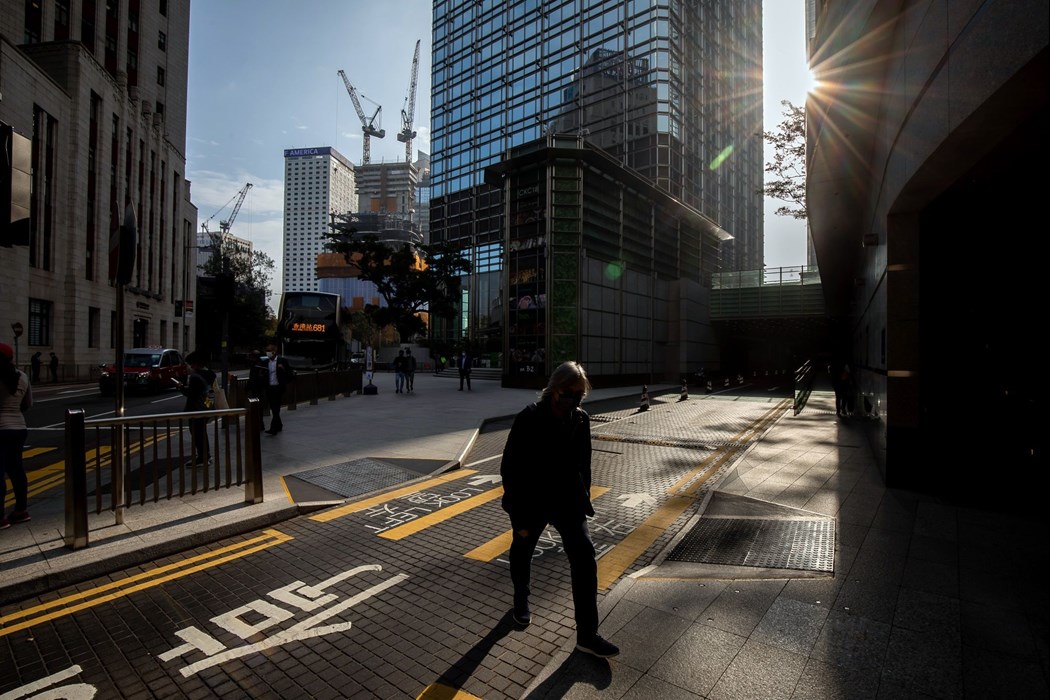 A commuter in Central district in Hong Kong, China, on Thursday, Jan. 27, 2022. Hong Kong’s economic performance in the fourth quarter may provide little consolation as the city struggles to bring the omicron wave under control, putting pressure on the government to dole out more stimulus for hard-hit sectors like retail.

S&P 500 and Nasdaq 100 contracts both rose by at least 0.5% as the 10-year Treasury yield slipped to 2.8%. Technology led the advance in Europe’s Stoxx 600 benchmark as rates on benchmark German and UK government debt fell.

Friday’s stronger-than-expected US non-farm payrolls data added to the case for more Fed monetary tightening, and traders are looking to inflation numbers due this week for clues on the policy path. Rate-hike expectations have pushed up Treasury yields and the dollar, while a key part of the US bond curve is close to the most inverted level since 2000, suggesting investors foresee a recession as the Fed applies the brakes on the economy.

“The NFP miss was large enough to re-ignite the inflation debate and renew focus on US CPI prints,” said Peter McCallum, a strategist at Mizuho International Plc in London. “Indeed, a very unexpected move lower in US CPI is needed for the market to stop thinking about the Fed having to do more. And with more tightening, the probability of a hard landing rises.”

But strategists at Morgan Stanley and Goldman Sachs Group Inc. expect corporate profit margins to contract next year given unrelenting cost pressures, an outlook that is at odds with the mood in equity markets. According to Morgan Stanley’s Michael J. Wilson, among the most vocal bears on US stocks, “the best part of the rally is over.”

US inflation data this week could shape views on the outlook for Fed policy and inject more market swings. While price pressures may be topping out, it’s unclear if they will persist at stubbornly high levels. Traders now see greater odds of another 75 basis-point Fed hike in September, part of a global wave of rate increases.

The latest comments from Fed officials left a question mark over wagers on a policy pivot toward reducing borrowing costs next year.

The July US payrolls report is “likely to enhance the Fed’s inclination to front-load interest rate hikes until the policy rate overshoots neutral by a good margin over the next few months,” TD Securities strategists including Priya Misra wrote in a note.

Elsewhere, the US Senate passed a landmark tax, climate and health-care bill, speeding a slimmed-down version of President Joe Biden’s domestic agenda on a path to becoming law.

US-China tension over Taiwan remains elevated. China’s military announced a new exercise near the self-ruled island in the fallout from US House Speaker Nancy Pelosi’s visit.

The Worst Is Yet to Come for US Credit Markets: MLIV Pulse