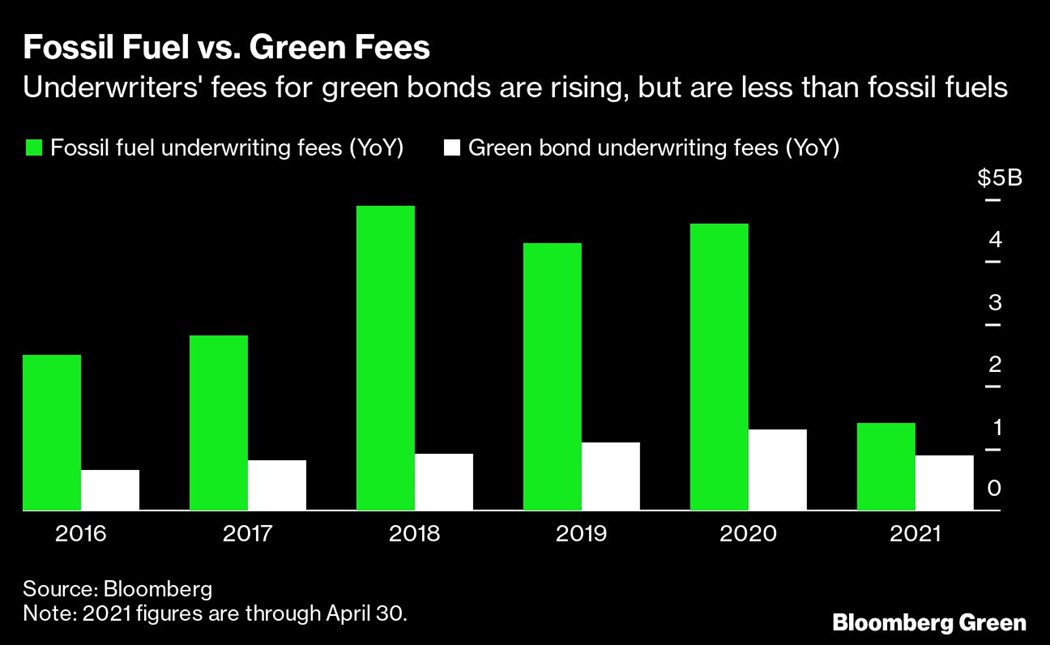 Wall Street is on pace to earn record fees from climate-conscious debt, but bankers make more money financing the companies behind global warming.

While investment bankers are on pace to earn record fees this year from selling green bonds, they still make far more money arranging debt issues and loans for fossil-fuel companies.

The numbers speak for themselves: $887 million of revenue from green bond customers, compared with $1.4 billion from fossil-fuel clients.

The imbalance remains despite CEOs of JPMorgan Chase & Co., Citigroup Inc. and other major banks repeatedly talking up the importance of protecting the environment. JPMorgan’s Jamie Dimon mentioned the word “climate” at least 10 times in a letter he sent to shareholders last month.

JPMorgan is the top financier to energy companies since the clinching of the Paris climate agreement in 2015, and ranks as the No. 2 underwriter of green bonds behind France’s Credit Agricole SA.

“We are dedicated to addressing climate and sustainability around the world,” Dimon wrote. He added however that he considers the issue complex, because “we need to acknowledge that the solution isn’t as simple as walking away from fossil fuels.”

“We will need resources such as oil and natural gas until commercial, affordable and low-carbon alternatives can be developed to meet all of our global energy needs,” Dimon wrote. “This is where business and government leaders need to focus their time and attention."

In the past four-plus years, New York-based JPMorgan earned about $903 million of revenue from working with non-renewable energy companies, compared with $228 million from advising on green bond transactions for companies and governments, according to data compiled by Bloomberg.

Achieving a net-zero carbon future will require “a massive amount of capital directed at decarbonizing the economy,” which is something only the financial-services sector can facilitate, said Emily Kreps, global director of capital markets at CDP, an environmentally-focused nonprofit, in a report published last week.

Financial institutions that don’t currently measure their financed emissions must start doing so now to understand their overall climate impact and the risks they face, Kreps said.

There is some hope however that Wall Street might actually start putting its money where its mouth is: 2021 is shaping up to be a whopper for green bond underwriters.

The fees earned in the first four months of 2021 were more than triple what banks pocketed during the same period of 2020, with companies and governments issuing more than $150 billion of green bonds, Bloomberg data show. The current record for full-year fees from green-bond issuance was the $1.3 billion earned in 2020.

Still, banks are garnering about 40% more in fees from helping out fossil-fuel companies, and it’s a trend that—while narrowing—shows no sign of ending anytime soon.

“This is a significant opportunity for banks to play a leading role in driving the net-zero transition,” Stephanie Pfeifer, CEO of the Institutional Investors Group on Climate Change, said in a recent report. “With five years already elapsed since the Paris Agreement, talking the talk must be replaced with walking the walk.”