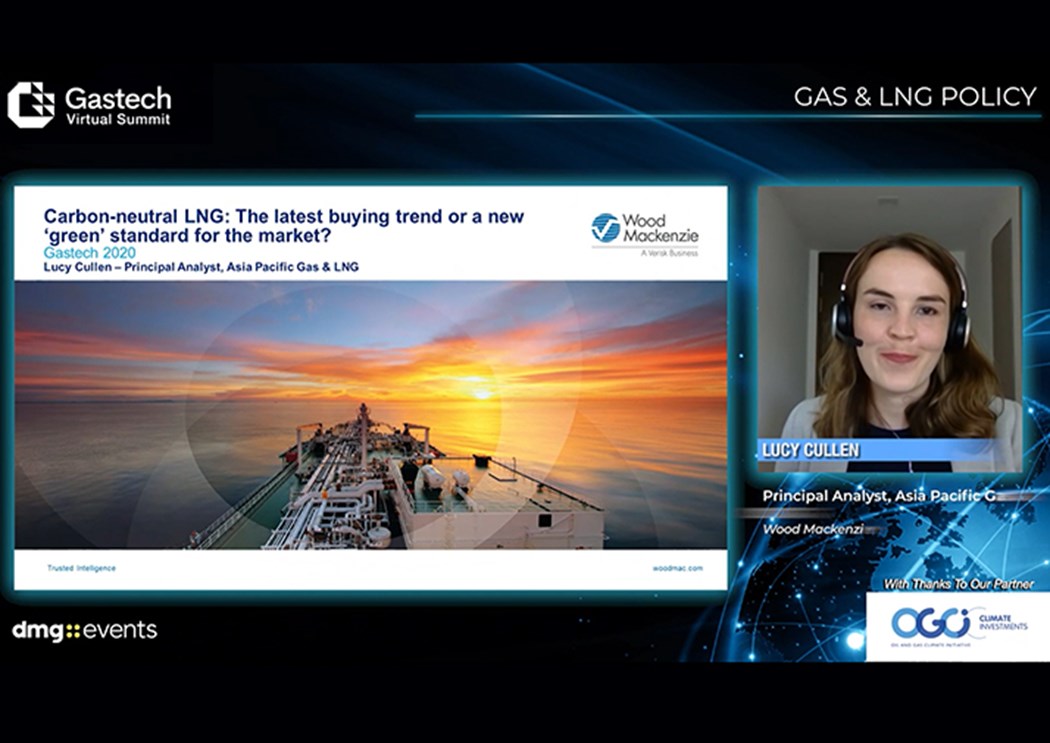 Shell and Jera’s recent moves to strike “carbon-neutral” liquefied natural gas (LNG) deals created a stir in the gas market. As the energy transition accelerates, gas demand is set to rise, and cleaner LNG could become a vital component of the future energy mix.

So far six carbon-neutral cargoes have been delivered or agreed and one long-term supply tender has been launched. Despite these cargoes being a marginal share of the overall LNG market, the deals have received major attention.

Cullen told delegates: “ ‘Carbon-neutral’ does not simply mean a cargo creates zero emissions but rather that emissions are measured, certified and offset.

“There is no consensus yet on which emissions should be offset. Various definitions have been applied so far, ranging from an ambitious objective to offset full life-cycle emissions of LNG cargoes, to offsetting part of the value chain.”

While the concept of carbon-neutral LNG is still in its infancy, Cullen told Gastech delegates the industry should consider how best to achieve carbon reductions in the long-term.

“Regardless of how we define ‘carbon-neutral’ LNG, emissions measurement and transparency on these emissions is a challenge which must be addressed. Measurement methodologies and standardisation will be critical if carbon-neutral LNG is to become more mainstream.

She added: “Gas will play an important role as a transition fuel globally. Even under the IEA sustainable development scenario, which envisions aggressive carbon reductions.

“The continued rise of renewables will change the competition space for gas and LNG. By bringing greater lower-carbon competition, focus will increasingly shift to emissions. Gas is cleaner on a combustion basis, but is it clean enough?

“That question will be especially important for LNG, as Wood Mackenzie expects its share of the mix grows at a faster rate than gas overall.”

Cullen said: “Full life-cycle carbon offset makes a great news headline. It is ambitious, but can it be adopted widely by the industry? Perhaps not, although it may be achievable for a smaller subset of cargoes or for certain players who have visibility over the full value chain emissions.

“A more focused approach targeting emission reduction in the upstream/liquefaction segment – by adopting carbon capture and storage, and increasing plant efficiency, for example - may be a more achievable long-term objective that can be adopted more widely across the LNG industry,” she said.

While sellers are looking at to make projects as carbon competitive as possible, what is motivating buyers?

Cullen said there is an element of early mover advantage at play and good news headlines.

“These first deals have offered participants experience with carbon neutral transactions. This is important as we move into a lower carbon future.

“But these deals were not solely motivated by green ambitions and future proofing. Economic and strategic realities still weighed heavily on these decisions and ultimately innovative ways of minimising the impact of the carbon-neutral cost premium for buyers helped to create the right opportunities.

“Until firmer regulation comes into play, these factors will continue to be considerations.”

Cullen added that as LNG demand continues to grow, so will demand for greener LNG.

“Targeting emissions reductions in certain segments of the LNG value chain seems an achievable route to carbon-neutral LNG and wide-scale adoption in the industry,” she said.

“But more needs to be done on emissions measurement, standardisation and policy to increase participation and confidence and to encourage buyers.

“We may very well see that – at the very least - proof or visibility of supplier carbon credentials will become as norm. This will lead to greater buyer scrutiny and differentiation between projects, and prices.”

Cullen added: “We are already on the road towards greener LNG, and the pressure to achieve carbon neutrality will only continue rising. Can the LNG world afford not to prepare?”